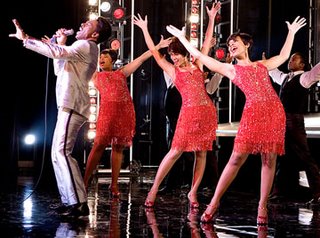 Bill Condon and crew blasted the roof off the joint. We now, officially, have a best picture frontrunner and one that's going to be tough to beat.

I eavesdropped on lots of conversations out in the lobby afterward and everybody was raving, gushing, shaking, cheering. Clearly, "Dreamgirls" is a dream come true as a film production. It transforms a Broadway classic into a movie masterpiece. In fact, it's even better than its stage original. I'm a longtime fan, I'm allowed to say that. The new song additions are transcendental. "I Love You, I Do" is a bouncy delight, but "Listen" is a knockout. While watching "Dreamgirls," just when you think Jennifer Hudson has stolen the whole film from Beyonce the same diva way Beyonce steals the Dreams away from Hudson in the film story, Beyonce rallies with a song that dares to try to upstage "Dreamgirls'" emotional core: Hudson's rip-your-head-off performance of one of the great f-you songs in Broadway lore — "And I Am Telling You I'm Not Going."

Wow. Dreamgirls looks like it not only lives up to the hype, but blows it out of the water. Tom O'Neill calls it "a dream come true" and "a perfect film." It looks like it has now solidified and justified its status as a Best Picture frontrunner.