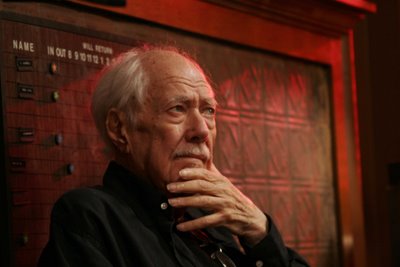 Robert Altman, the caustic and irreverent satirist behind "M-A-S-H," "Nashville" and "The Player" who made a career out of bucking Hollywood management and story conventions, died at a Los Angeles Hospital, his Sandcastle 5 Productions Company said Tuesday. He was 81.

This is truly sad news. Altman was one of the greats, a legend in his own time. In addition to the films listed above, he also directed one of my all-time favorite films, 2001's Gosford Park.

Known for his roving camera style and overlapping dialogue, Altman created a style on his own to become one of the great maverick filmmakers of the 1970s. Movies have never been the same since him, and never will be again.

His last film, this year's A Prairie Home Companion, was an elegaic tale about the task of saying goodbye - a fitting end to one of the greatest careers in film history.
In my review of that film, I said:

Much talk has been made about the film's thematic connections to real life. At 81 years old, many have speculated that this could be Altman's last film. For his last few films, he has been accompanied by a back-up director, just in case. While the themes of moving on would certainly resonate that much more if that were the case, I think we shouldn't be too quick to bury the old maverick just yet. According to Entertainment Weekly, Altman already has another film in the works set to begin shooting this September called "Hands on a Hard Body," starring Chris Rock, Dwayne "The Rock" Johnson, Billy Bob Thornton and Hilary Swank.

As it turned out, it was his final film. In that same review I also said:

"A Prairie Home Companion" is a warm, witty ode to ends, beginnings and everything in between.

And I stand by that. It's a warm farewell to a truly great man.
Goodbye, Mr. Altman. We will miss you.
Email Post