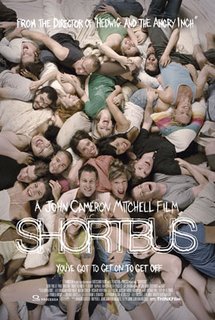 I just got back from seeing Shortbus, the second film by John Cameron Mitchell (Hedwig and the Angry Inch), and I must say...it's one of the best of the year. I was thoroughly impressed. Even more so than with Zhang Yimou's tender Riding Alone for Thousands of Miles, which I also saw tonight. Mitchell is a natural born filmmaker. It's a wild, exuberant, glorious celebration of sex and its profound effect on the lives of a group of young New Yorkers, straight, gay, and bisexual alike.
The Academy would never touch a film like this, with its boundary shattering, unsimulated, graphic sex scenes - which are the most explicit sexual images to ever be shown on the big screen outside of a porn theater. I hope it at least gets recognized by the Independent Spirit Awards. Those are the fearless awards for the fearless films, and Shortbus is a fearless film if ever there was one. Why we're not hearing more about it I have no idea. This film deserves, no, demands recognition. A film this groundbreaking should be noticed.
It's one of the most liberating, ecstatic, and poignant films to come along in years. It's like a shot of adrenaline straight to the heart...we have never seen a movie like this before. It's daring, it's audacious, it's sexy...it's wonderful!
Email Post