Tom O'Neill over at the L.A. Times posted a story on his Goldderby blog about the top ten contenders for Best Picture.

They are: Babel, Bobby, The Departed, Dreamgirls, Flags of Our Fathers, Little Miss Sunshine, The Pursuit of Happyness, The Queen, United 93, and Volver.

And the runner-ups: Blood Diamond, Borat, The Painted Veil, The Good German, The Good Shepherd, The Last King of Scotland, Little Children, and World Trade Center.

Overall he's pretty much right on target, I think. Except for United 93 and Little Miss Sunshine being in the top ten. I would replace them with The Good German and Little Children.

If New Line would get off their butts and promote Little Children more in earnest, I think they would have a good shot at having another In the Bedroom on their hands - since this is the sophomore directing effort of Bedroom director Todd Field, and the film is getting fantastic reviews (87% positive at Rottentomatoes.com). And The Good German is lining itself up to be the prestige picture of the fall (witness the Casablanca-esque poster). We'll see if it lives up to that, but in the meantime I think it deserves serious attention.

I just don't see the Academy honoring either of this year's 9/11 themed films...United 93 and World Trade Center are both fine films, but neither are Best Picture worthy, and United was released too early in the year to really be taken seriously. Although last year's champ Crash was released in May so, stranger things have happened. 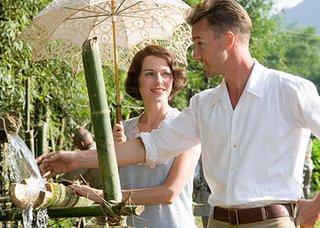 The Painted Veil will be an interesting one to watch. The trailer is simply gorgeous. It looks like the kind of literary historical epic that Oscar has loved in the past (The English Patient), and it's about a the wife of a British doctor (Naomi Watts) who travels to China in 1925 to help her husband (Edward Norton) fight a cholera epidemic, so it has an air of importance. Most of the period costume epics like this have been failing to get Oscar' attention recently (Cold Mountain, Memoirs of a Geisha), but this could be the one that breaks the mold. Is it being released too late in the game though? It opens in New York and Los Angeles on December 15, and goes into limited release on December 29. Time will tell. However this could be another late-breaking, come-from-nowhere surge like Million Dollar Baby was in 2004.

Anonymous said…
re the painted veil

since you've obviously seen the trailer of the film, you should have realized the lead of this film is naomi watts, not edward norton who is 2nd listed. the w somerset maugham's novel based on which this film is made clearly tells that this is the story of kitty fane's (watts) recovery and redemption of love with her husband who is a british doctor (norton).

to be accurate and fair, this is not the story of a british doctor (norton) and his wife (watts). putting it this way would be slighting lead and oscar-nominee watts a female actress against edward norton a male actor.
9:20 AM

Matthew Lucas said…
I know that she is the lead, I never said otherwise. The film centers around her trials being the wife of a doctor in China. I just described the film in the quickest and simplest way I felt possible. I assure you I meant nothing sexist, I was trying to quickly summarize the plot based on my memory of the trailer. But I have since corrected the plot description. Thank you for bringing it to my attention.
2:57 AM