An Open Letter to the Academy

Dear members of the Academy,

Every year, tiny movies with no buzz go unheard of by most of the general public. These films are usually art-house releases - independent or foreign films that nobody has ever heard of, and probably wouldn't care about if they had.

What a shame. As is often the case with films like this, studios have no confidence in them because they have almost zero marketability. Mainstream audiences just don't go see them. They would rather watch something blow up or Will Ferrell run around a race track in his underwear.

That is a how a stunningly beautiful film like The House of Sand gets lost in the shuffle. 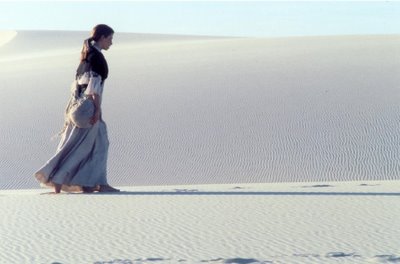 Given a microscopic, art-house release back in August, Andrucha Waddington's The House of Sand is one of the most rapturous and haunting films I have seen in ages. Chronicling the lives of three generations of women stranded in the Brazillian desert, the film takes a lyrical look at the relationship between mothers and daughters, the idea of home, missed opportunities and chances regained. The breathtaking desert locations become their own character...the sand literally has its own personality.

Fernanda Montenegro and Fernanda Torres give powerhouse performances, playing both young and old versions of all the film's characters. Their subtle, unassuming (and yes, Oscar-worthy) acting adds to the film's stunning realism, drawing us in and refusing to let us go...leading to a heartrending emotional catharsis.

It's also devastatingly quiet, the only music being the rustling of the sand in the wind. Music here represents the world they left behind, and when we finally hear it, its power is magnified.

Few films capture such depth of emotion with such simple, unassuming direction. Waddington's camera simply observes, the sands of time keep moving, scattering into the ever-present wind, and we are given one of the most surprisingly engrossing, breathtaking films of the year - the kind that unfolds like a good novel. You can almost understand why one character never wants to leave...because neither do we.

So this is my plea to you members of the Academy. Please nominate this film. See it. Live it. It's worth every minute. Brazil did not submit it for consideration for Best Foreign Lanuage Film, and if any movie ever deserved that title this year, this is it.

The House of Sand is a gloriously simple film of magnificent power. It's a shame to see such talent go unnoticed.