Last weekend I had a long, leisurely breakfast with one of Hollywood's most notable studio chiefs. While we chatted casually, he said, in between the lattes and bagels matter-of-factly, what we all know but seldom admit out loud: "Of course, 'Brokeback Mountain' didn't win best picture because of the gay thing."

He's an academy member, seasoned Oscar veteran, a "str8" chap, as the lingo goes, and not affiliated with "Brokeback."

"I couldn't believe how many academy members even refused to watch it," he added, shaking his head. "There's no doubt in my mind that we saw the secret, ugly side of Hollywood when the best picture winner was announced. I'm not saying 'Crash' wasn't a great film, no, no, but that's not why they voted for it.Look, I've been in this Oscar game long enough to know how to read these things. Believe me. What we saw was a disgusting display of anti-gay bigotry. Yep, in so called liberal Hollywood."

There's much evidence to back up this studio boss' assertion. Many academy members both hip (Sarah Jessica Parker) and old school (Ernest Borgnine, Tony Curtis) admitted they didn't watch "Brokeback" before voting. In toto, "Brokeback" received more best-picture awards from kudos organizations than any other film in history — 26 — but not the film academy. Odd, eh?

The article goes on to talk about how the prejudice demonstrated by the Academy last year may translate into prejudice against the predominantly African-American cast of Dreamgirls. I don't buy it. It's much harder to claim racism against the Academy than homophobia, especially in a voting body that just awarded Crash Best Picture of the Year. 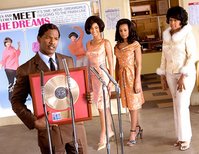 There may very well be unspoken racism in the Academy, the kind they may not even see in themselves, much like Crash portrayed. But I don't think that the fact that most of the Dreamgirls cast is black is going to keep people from seeing the film, the way gay love kept them from seeing Brokeback.

Will it stop them from awarding it Best Picture? Well that is yet to be seen. It hasn't even been nominated yet, and most of us have yet to see it. It's also not the cultural milestone that Brokeback Mountain was.

I don't know if it will be the best film of the year. I haven't seen it yet so I can't pass judgement. Maybe it is, maybe it isn't. But I do think it's a bit early to be fretting about racism just yet. If, when awards time rolls around and we find out that Academy members aren't seeing the film, then maybe there is a case for racism.
Email Post