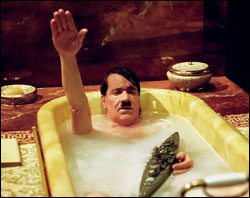 BERLIN -- A Hitler comedy made in Germany?

It might seem tasteless, but "My Fuhrer" is now in post-production and will hit German auds in January amid a tidal wave of publicity -- not all of it good.

Turning a historic demon into a comic figure has worked elsewhere, but what will Germans think of Hitler gags? Will the shamed country, which still feels pain six decades later, be able to chuckle at a fictional Fuhrer playing with toy battleships in a bathtub?

Swiss-born Jewish helmer Dani Levy and X-Filme topper Stefan Arndt are gambling that Germans are indeed ready to laugh about their horrific past and the madman at the center of it with "Mein Fuehrer -- die wirklich wahrste Wahrheit ueber Adolf Hitler" (My Fuhrer -- The Absolutely Truest Truth About Adolf Hitler).

"In this experimental age, everything's allowed. Taboos can be broken and the boundaries of good taste violated as long as your conscience is on the good side," Levy said of the farce, due out Jan. 4. "People will laugh watching it, but at the same time be shocked at themselves for laughing."

Hmmm...sounds...interesting. It's not a new idea though. Charles Chaplin did it in The Great Dictator in 1940, which became his biggest box office success. Still though...it depends on how they go about it. Stefan Arndt isn't Charlie Chaplin (but then again, who is?). Only time will tell.
Email Post