From the Los Angeles Times:

"BLOOD DIAMOND," Ed Zwick's film starring Leonardo DiCaprio, Djimon Hounsou and Jennifer Connelly, doesn't open until Dec. 15, but it's already getting more free publicity than Warner Bros. could have dreamed of. Set in the late '90s when rebel militias seized control of Sierra Leone's diamond mines, selling rough gems to buy weapons they used to slaughter and mutilate many thousands of innocent people, "Blood Diamond" tells a fictional tale of two South Africans, a white mercenary and a black fisherman, who find a rare pink diamond. But even two months before its release the film has spurred talk that it could turn consumers off to buying diamonds for fear their money would be supporting murderers.

De Beers, the international diamond cartel that controls the majority of the world's diamonds, has gone on the offensive to try to distance the industry from the history depicted in the film. But according to Ken Sunshine, Leonardo DiCaprio's publicist, those connected with the movie feel the stepped-up public relations efforts have backfired for De Beers. "I hope they keep on publicizing the controversies and our 'Blood Diamond' movie," Sunshine said.

So De Beers thinks Blood Diamond paints the diamond industry in a bad light, and launches a public attack against it. When are people going to learn that stunts like that only help the things you are attacking? The diamond industry has a lot of blood on its hands, and Amnesty International is hoping to use the film to raise awareness of what is going on in Africa. I don't know why they actually expect filmmakers to comply with their demands. They're making a movie, not a commercial. Audiences don't need a De Beers endorsed post-script attached to the end of the film, it's a slap in the face to artistic integrity (but then again, so is the studio system, but I'm not getting into THAT one). 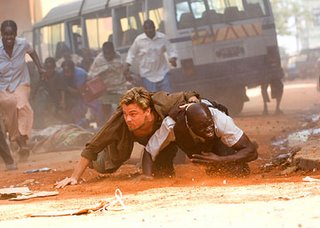 It's amounted to loads of free publicity for Ed Zwick and Warner Brothers. Which probably has something to do with why they bumped up the released date from December 15 to December 8. That and the children's fantasy epic Eragon is also being released on the 15th and will likely clean up at the box office. Releasing it on the 8th positions it against Mel Gibson's Apocalypto, and Nancy Meyers' The Holiday. Blood Diamond stands a better chance of coming out on top of that threesome, drawing action-oriented audiences away from scandal-ridden Gibson's latest violent dead-language opus. The Holiday will give it a run for its money though, it's a star-studded romantic comedy, which tend to play well this time of year.
Email Post