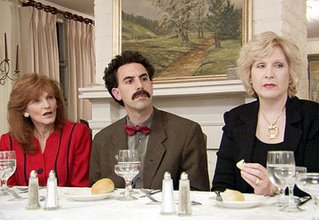 According to the Carpetbagger over at the New York Times, Cindy Streit (left), the etiquette coach who attended to Southern society dinner party in Borat: Cultural Learnings of America for Make Benefit Glorious Nation of Kazakhstan said:

“I am outraged with his deception — how dare they! The last laugh will be on “Borat,” not innocent members of the public.”

WRONG! Sacha Baron Cohen has the last laugh here...because he created a comedic masterpiece...one that has cemented its place in the cultural history books. It's a phenomenon, and now people are coming out of the woodwork to denounce him.

They may sue him, complain about him, protest...whatever. No one cares. Because people will keep going to see Borat...and the uproar will only encourage viewers. We have seen the movie, and we have loved it. According to its scores on Metacritic and Rottentomatoes, it is the second most critically acclaimed film of the year, behind The Queen (talk about apples and oranges).

People can attack Cohen for what he has done all they want. But nothing can revoke the verdict of court of public opinion on this one...and the box office returns speak for themselves, $76,154,492 so far according to Box Office Mojo.
Email Post