"Letters from Iwo Jima" to be Released This Year

Wow. This is huge...massive even. This could upset everything in this year's Oscar race. The Envelope is reporting that Warner Brothers has bumped up the release of Clint Eastwood's Flags of Our Fathers follow-up, Letters from Iwo Jima, from February 9, 2007, to an Oscar qualifying run the last week of December in New York and Los Angeles. The wide release will still open as planned in February. 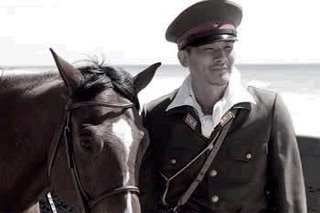 Tiny qualifying runs with later wide releases don't usually work (see last year's magnificent The New World, which went home with only a nod for Best Cinematography...which it lost). Could this be the studio's last ditch attempt at saving the Oscar hopes of the waning Flags of Our Fathers?

I know many bloggers have pronounced Flags dead in the water...but I'm not buying it. I still see a Best Pic nomination in its future...although a win is very iffy.

However the release of Letters could give it a definite boost by keeping it alive in voters' memories.
Click here to read the story at The Envelope.
Email Post