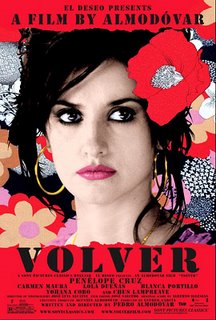 The opening of Pedro Almodovar's Volver is this Friday...and I must say, after attending Sony Pictures Classics' excellent Viva Pedro re-release, I'm psyched. But Oscar buzz seems to have cooled around this film. Early buzz had it among the top five contenders, a shoo-in for Best Picture nomination. So what happened? Buzz is still strong for star Penelope Cruz for Best Actress (she should have been nominated for her excellent performance in Almodovar's Oscar-winning All About My Mother), but the Best Picture buzz seems to have cooled.
Why?
The fact that Spain has submitted it as their official entry in the Best Foreign Language category might have something to do with it, where it will most likely win. Spain wasn't too keen on Almodovar's politics, and chose another film to submit in 2002, which led to Almodovar's victory in the Best Original Screenplay category for Talk to Her. Voters could be content to leave it in the Foreign Language category where it is almost assured success.
I haven't read anything in a while touting it as a major contender beyond Best Actress. That's not to say it's not possible. Volver stands the best chance of beating Oscar's notorious bias against foreign language films. The last foreign language film to be nominated for Best Picture was Crouching Tiger, Hid 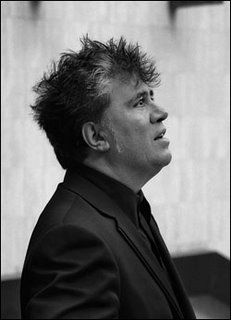 Reviews for Volver have been very strong. It currently has an 88% positive rating on Rottentomatoes.com, and an 85 out of 100 on Metacritic.com, which ranks it as one of the best reviewed films of the year, with a score that puts it on track with films like The Pianist and About Schmidt.
I will be a better judge when I actually see Volver. But the question is an interesting one. Can it overcome the foreign film stigma, and carry it's beloved director into the Big Five for the first time? He certainly deserves it. Time will tell if this is the movie to do it.