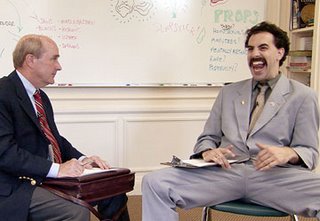 CNN.com did a story today on the people who were the unwitting stars of Borat: Cultural Learnings of America for Make Benefit Glorious Nation of Kazakhstan. Most seem pretty gracious about it, except those who got caught making racist or sexist remarks. And apparently the Pamela Anderson was indeed in on the joke. Which is a relief in a way, and a disappointment in another.

"Ronald Miller, of Natchez, Mississippi, was baffled by the ruse. He and his wife attended a dinner at a plantation house, which they were told would be an interview with an "Eastern European television reporter coming to Natchez to film social customs in the South," he told the AP.

Borat disturbed guests, Miller said, by making anti-Semitic remarks and saying slavery was wonderful. He also invited a dinner guest -- a woman posing as a prostitute -- to join the group.

In another scene in the film, former "Baywatch" babe Pamela Anderson was attacked by Borat's alter ego at a book signing, and he later chased her through a parking lot.Did she learn of his antics in advance? Yep, claims Anderson.

"I love Borat ... Of course (Sacha) and I planned this years ago," she wrote in a recent post on her Web site. "And it turned out perfect -- I'm so happy for him.""