There are many reasons why I consider David Lynch to be my favorite director. First, his brilliantly bizarre, cerebral films that feel like extremely lucid, stunningly beautiful nightmares. Second, his charming eccentricities, like his daily weather report on his website.

His latest undertaking is one of my new favorites. Yesterday, according to Defamer, Lynch sat on a street corner in Los Angeles with a cow on a leash and a giant banner that read FOR YOUR CONSIDERATION, with Laura Dern's picture on it from his upcoming film, Inland Empire. Next to him was another sign that said "without cows there would be no cheese in the Inland Empire." 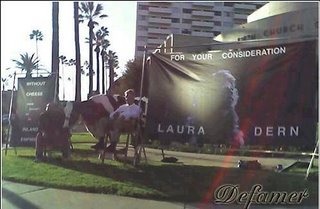 That is quite possibly the greatest FYC ad ever. David Lynch is just the greatest.
Click here to read the story.
Email Post