In the nearly two decades since the release of The Matrix Revolutions and the end of the original Matrix trilogy, directors Lana and Lilly Wachowski both came out as transgender, and it doing so completely decontextualized their films' exploration of "waking up" to a reality much different from the one society tries to force upon us. 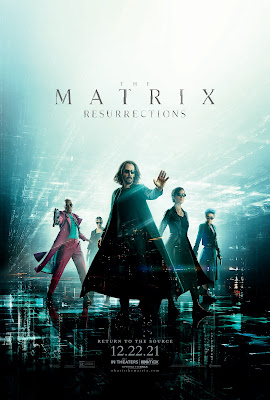 The legacy of The Matrix has, in many ways, been co-opted by rightwing groups who latched onto the "red pill" imagery as a metaphor for "waking up" to societal control by shadowy liberal elites, an interpretation that the Wachowski sisters have long fought against. Returning to The Matrix 18 years after the trilogy came to an end allows them to reclaim the world they created and reassert its inherent trans-ness in thrilling ways. Watching The Matrix Resurrections is something of a revelation, not only  in the way Lana Wachowski forcibly reclaims her legacy, but boldly reorients the themes of the original trilogy,  while also grappling with her own place in cinematic history and the enduring influence of The Matrix  for good and ill.

If you'll remember, Neo (Keanu Reeves) and Trinity (Carrie-Ann Moss) both died saving the world at the end of The Matrix Resurrections, but true to its title, The Matrix Resurrections finds them plugged back into the Matrix, too powerful for the machines to let die. Neo is now living out his life as video game designer John Anderson, who has created an entire video game world based on the events of the first three Matrix films. Neo feels that something is missing from his life, and is attempting to escape from the shadow of his Matrix games before getting pulled back in by Warner Bros. executives looking for a quick cash grab, insisting that they will continue with or without Neo. He reluctantly agrees, but soon finds the characters he created becoming sentient and reaching out to him to let him know that the Matrix is indeed real, and that he must return to the real world to fight a new threat posed by the Analyst (Neil Patrick Harris), whose machinations within the Matrix, coupled with a newly reawakened Agent Smith, threatens the fragile peace between humanity and the machines. Yet the newly awakened Neo has little interest overall in the historic conflict brewing around the Matrix - his focus lies with reawakening Trinity, the love of his life, a goal that threatens the fragile fabric of the Matrix, as their unique connection is revealed to be the crux of the entire conflict.

It's all a very bold distillation not only the legacy of The Matrix  but of the very idea of sequels and fandom, with Wachowski very blatantly grappling with her own place in all of it. There have been many apt comparisons of The Matrix Resurrections to Wes Craven's metatextual New Nightmare, but I was also struck by its similar thematic threads to Joe Berlinger's much maligned (and much misunderstood) Book of Shadows: Blair Witch 2, a film that acknowledges the existence of its hugely influential predecessor and seeks to interrogate its own societal impact. Wachowski lays bare the trans allegories of The Matrix  turning subtext into explicit text, deconstructing the binary idea of identity and even the imagery of the red pills and blue pills. The Matrix Resurrections is decidedly lower stakes than the apocalyptic Matrix sequels that preceded it, and Wachowski almost seems to relish subverting fan expectations and defiantly doing her own thing.

This is, after all, her world, and we're just living in it. This is Wachowski's story to tell, and it's incredibly invigorating watching her reinvent her own creation, even at the behest of a studio looking for a quick buck by reviving a once lucrative franchise, to defiantly critique the very nostalgia that demanded its resurrection. The Matrix Resurrections is scathing in its criticism of sequel and reboot culture, and she casts a withering eye on those who misunderstood her intent and forced her to compromise her intent in the first place (including abusive producer Joel Silver and Warner Brothers itself). You can almost hear her shouting "are you not entertained" like Maximus Decimus Meridius while simultaneously giving the audience what it asked for, but on her own terms - defiantly refusing to tell the story that Warner Bros. wanted her to tell. This is not just more of the same, it's a radical reinvention, a love story above all else that seeks to reframe the narrative around The Matrix and its enduring legacy.

It's invigorating to watch a filmmaker like Wachowski, who's always danced to the beat of her own drummer, reevaluate herself as an artist and examine her own contribution to our current media landscape, of which nostalgia has become its own kind of Matrix that allows people to comfortably live in the past. In a time where mainstream studio filmmaking is focused on giving the audiences what they want, Wachowski seeks to surprise us, by giving us what we didn't know we needed instead of what we thought we wanted. It may as well have been called The Matrix Reclamations, reorienting and reinvigorating an old story for a world that is very different from the one that gave rise to The Matrix  and the film is all the better and more fascinating for it. This is a breathtaking resurrection indeed.