Whatever Happened to "Marie Antoinette?" 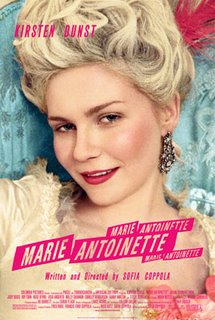 Before its release, it was touted as one of the Movies to Watch this season. After all, this was the follow-up to Sofia Coppola's rapturously reviewed Lost in Translation, which made her only the third woman nominated for Best Director, and garnered her a Best Original Screenplay statuette.
So what happened? It's a wonderful film, a shimmeringly unique work of art. But not everyone shares Coppola's vision - witness the 53% positive rating on Rottentomatoes.com. Audiences and critics have been evenly divided between love-its and hate it's since its debut at the Cannes Film Festival earlier this year. On one side you have critics like Lisa Schwartzbaum from Entertainment Weekly calling it "The work of a mature filmmaker who has identified and developed a new cinematic vocabulary to describe a new breed of post-postpostfeminist woman." And on the other side Phil Villarreal of the Arizona Daily Star who proclaims "off with its head!" Ouch.
Moulin Rouge still managed a Best Picture nomination with divided opinions, but I think this is different. There are far too many people who loathe this movie. Its Oscar chances now seem relegated to Best Costume Design and maybe Best Art Direction. In my review of Marie Antoinette I said: "Coppola has crafted a magical, intoxicating film, distinctly her own, that cements her place as one of the most exciting and original new voices in American film, and Marie Antoinette is the year's most audacious work of art."
And I stand by that. It's wonderful. I think its a shame that so many people didn't "get" it. Oh well...their loss. Art is very often misunderstood. But it's not the kind of thing that Oscar is going to crown. Sadly, this awards season it looks like Marie Antoinette is dead in the water.
Email Post