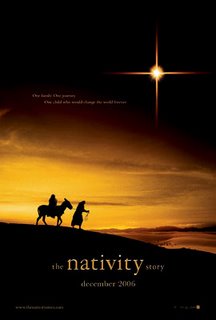 Check out this article from the New York Times about The Nativity Story:

The two decided to team up and produce movies that were meaningful to them and would speak to the heartland communities in which they grew up. Mr. Bowen came from a traditional Roman Catholic family in Texas, where he was an altar boy and his parents served as lectors at Mass. Mr. Godfrey was raised in a charismatic Christian church in east Tennessee, where parishioners, he said, spoke in tongues and were filled with the Holy Spirit.

Both had strayed far from their roots to Hollywood Babylon.

Stuff like this really annoys me. Fine, make films that speak to your convictions if you want, but this whole "Hollywood is immoral, I didn't fit it" rhetoric is just crap. I hear it way too often, some Hollywood bigwig suddenly got religion and now they can't cuss in their movies. Please.
Don't get me wrong, I think this movie looks wonderful, the trailer is very moving. I just don't want to see this turned into another Passion of the Christ - a pandering sermon that whittles an entire religion down to trite guilt trips.
I think Catherine Hardwicke is a very interesting director. I loved her last two films, Thirteen and Lords of Dogtown. She displays a keen insight into the teenage mind, so seeing her tackle Mary could be fascinating. I just hope this is a serious character study like she says it is, not just another Christmas pageant marketed as a shining light amidst the darkness of Hollywood immorality.
That would be a real shame.
Email Post