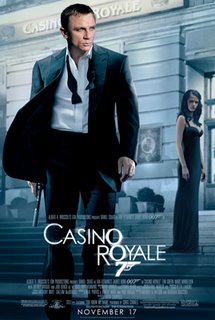 The latest James Bond outing, Casino Royale, starring Daniel Craig in his first appearance as Bond, is blowing critics away. With a 95% positive rating at Rottentomatoes (which puts it in a 5-way tie for 4th place for the highest rating of the year) and score of 80 at Metacritic, Casino Royale is getting some of the best reviews of any Bond film ever. Here is what some of the critics are saying:

"Relaunches the series by doing something I wouldn't have thought possible: It turns Bond into a human being again -- a gruffly charming yet volatile chap who may be the swank king stud of the Western world, but who still has room for rage, fear, vulnerability, love." - Owen Glieberman, Entertainment Weekly
"Flat-out one of the best Bonds ever." - William Arnold, Seattle Post-Intelligencer
"Craig, excellent in both art house endeavors ("The Mother," "Enduring Love") and blockbuster think pieces ("Munich"), has both a nasty streak and a soft side never before seen in the series; Fleming would recognize him as most like his literary creation: damaged goods in a tailored tux." - Robert Wilonski, Village Voice
"Let the purists squawk: In Daniel Craig, the Bond franchise has finally found a 007 whose cruel charisma rivals that of Sean Connery." - Ty Burr, Boston Globe
Email Post

Anonymous said…
I simply love Online casino, I play every day and I keep coming back for more.
I am not a problem gambler because I earn enough money to be able to support
myself and continue my online gambling time. I truly enjoy the relaxation time I
get and the ease with which can use and access online casino's. I hate the
stigma that is associated with gambling online as I view it as a release, an
escape and real "me" time. If it were to become a problem then I have no doubt
that I could and would simply cut online casino from my daily vocabulary. As it
stands though, gambling is simply something I enjoy and the internet and online
play are just a good way to access casino's. Playing against the house means I
never have to worry or feel about actually taking money from someone else as it
is only the online casino that would be paying me off for my wins. Talking about
wins, I have had some great wins in my online gambling career – my biggest so
far is $5000 on roulette, on one spin. I am fit, happy, healthy and I love life
and the online casino is just part of my every day existence and escape.
1:10 PM

Anonymous said…
Technology is ever increasing in the online world and Online businesses are
springing up every second to get on board the information super highway - "The
World Wide Web". We already have online auctions which have played a major role
in efficiency for everyday consumers to get bargain based products from all
areas of the world, but now we are faced with a new dilemma, Online Gambling and
online casinos. As a concerned member of the human race, I'm not sure that
Online gambling would be a legitimate business that benefits us as a society.
The big questions is, are the positives of online gambling greater than the
negatives?

Casino, Pokies, Bingo, slots and gambling centers all around the world are
already the cause of many family breakdowns and financial woes. Now we're taking
it to the next level – going online for our gambling. With the rate of young
adults participating in global gaming communities, by the billions, Gaming
companies are encountering a massive profit / money making facility just by
traditional arcade game play – which is absolutely fine. However, now parts of
the world are investing heavily in developments of Online Gambling and Online
Casino software to target global hopefuls in chances of winning their Million
dollars or their Austin Martins. How are we to monitor companies that provide
online gambling facilities? In some countries under developed countries, hungry
scheming predators are lurking about waiting for the next 'big idea' in ripping
consumers and the wonderful world wide web offers to do that. Where else can you
build a money making machine that can directly be linked to an offshore business
account in the British Virgin Islands and be able to people off? Online Casinos
are a major threat to our global socio economics and are a nuisance to the
Online community and the community at large. If I want to gamble I'd spend my
money and go to Las Vegas, instead of typing in my Credit card details and stare
at my laptop hoping to win money. Say no to Online Gambling and Online Casinos.
I sure did.
1:11 PM

Anonymous said…
The mathematics of online gambling are always against the individual. There
is no way that a professional gambler could ever say otherwise and yet how come
there are people that make money every day playing and gambling online every
day? Simply, they employ good strategies that work more in their favour than the
average person. The main goal of the professional gambler is to either target
weaknesses in online gambling or online casino's or play the other people off
and win their money. The professional gambler is not bothered by the winning or
the losing they simply focus on how they can win more and the best methods to
employ in order to get to their goal. Bet big to recoup loses is a good method,
a simple and yet effective method which can be employed on the roulette table by
betting on red or black in roulette. The method is simple, if you lose then
double up the bet and repeat until you win, then go back to the original amount
and then repeat until you are winning consistently. Another method on roulette
is taking a section of the wheel, like betting on a row of numbers next to each
other. That way if the wheel lands in a region consistently then there is
greater chance of it being on one of your numbers instead of on random text.
1:12 PM