The Envelope on the 5th Best Picture Nominee 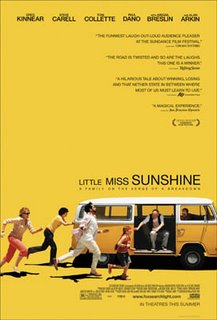 According to The Envelope, the four definite, slam dunk Best Picture nominees are The Departed, Dreamgirls, The Queen, and Little Miss Sunshine.
Huh? Little Miss Sunshine? Really? A slam dunk? A possibility perhaps, but not a slam dunk by any means. I think Babel should be more considered in the slam dunk category than Sunshine. I love both films, but I'm just not seeing it in the head of the pack. Those first three are most definitely sure bets. And I'm still holding out that Flags of Our Fathers will be nominated. The race will get much more interesting (and prognosticating will make much more sense) once the critics groups start announcing their awards and top ten lists. I think Flags will recieve a much needed boost from them.
Sunshine could be nominated still...but to call it a slam dunk is a bit premature. It's most definitely well liked, but will that alone carry it through to the top 5?
Email Post