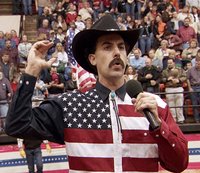 It's finally happened. Variety is reporting that two of the bigoted, sexist idiots who unwittingly became a part of the comedy phenomenon Borat: Cultural Learnings of America for Make Benefit Glorious Nation of Kazakhstan are suing 20th Century Fox.

The two frat boys from the University of South Carolina claim they were drunk when they signed the release forms (which is very obvious), and that they were assured that the film would never be shown in North America.
Now let's not forget that these were the two that so endearingly declared that they wished they could return to the days of slavery so they could enslave women and keep them for their pleasure. Really great guys, those two.
In a statement, their lawyer said "The depiction created by the defendants were offensive and objectionable to plaintiffs and to a reasonable person of ordinary sensibilities in that it made plaintiffs the objects of ridicule, humiliation (and) loss of reputation."