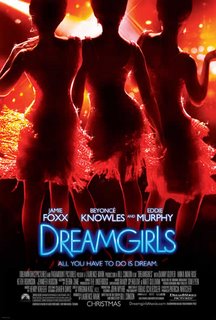 It still surprises me how people keep insisting that Dreamgirls is the one to beat in this year's Best Picture race. No one has seen it yet. And let us not forget that in 2004, before anyone had seen it, Alexander was the Best Pic frontrunner, and The Phantom of the Opera, Rent, and The Producers were all expected to be contenders. Sure, Dreamgirls looks good, and the pedigree is top notch (starring Jamie Foxx, Beyonce Knowles, Eddie Murphy, directed by Bill Condon). But all of these breathless exclamations that it is THE movie of the year, when it hasn't even been seen yet, may be a bit pre-mature. Hopefully it will be as wonderful as hoped, I'm just saying that expectations shouldn't be so high, when that happens you're liable to get disappointed.
Email Post