Why "Flags" is Still in the Oscar Race 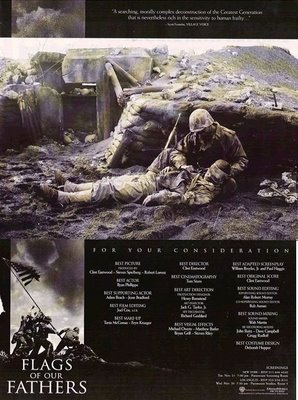 Very few pundits out there agree with me right now (except for Sasha Stone and Anne Thompson), but Flags of Our Fathers is still very much in the Best Picture race.
Kristopher Tapley at In Contention says:

“Flags of Our Fathers” really is down and out. It has been forgotten into oblivion, despite pretty FYC ads in the trades – a too little too late effort from Paramount marketing. The film also has the whiff of financial failure on it. On top of it all, the release of Eastwood’s sister film has been considered a move to revive hope in that structurally distressed endeavor. No film that needs the help of another studio’s release has the strength to survive something as vicious as an Oscar season.

I'm going to have to disagree with that on pretty much all fronts for three reasons. A) Clint Eastwood. B) it's about World War II. And C) it's a damn good movie. A great one even. All this tounge-wagging about how it hasn't done well at the box office is meaningless. Since when does the Academy honor the box-office winners? The grosses of the nominees from the past few years have been very low compared to other years (although for the types of movies they were, the grosses were pretty good). And let's not forget that The Shawshank Redemption was a box office bomb before it was nominated for Best Picture back in 1994. Master and Commander: The Far Side of the World was a very expensive film that did poorly at the box office...yet thanks to spectacular reviews and love for Peter Weir, it walked off with 10 nominations (and two wins - for Cinematography and Sound Editing). Last year Munich, a Steven Spielberg film of all things, didn't make that much either. Were In the Bedroom and Capote box office giants? No. But they did moderately well for their size and budget.
The thing is, the Oscars aren't awarded based on box-office grosses. And the grosses of Flags of Our Fathers are on track with his previous films Mystic River and Million Dollar Baby, and they had boosts from their nominations.
Flags of Our Fathers is a movie the likes of which the Academy can't refuse. Not only is it a flat out masterpiece (from a filmmaker they worship), but it's about one of their favorite subjects - WWII. And in the latest issue of Film Comment...it has an almost across the board 5-star rating from nearly every major critic in the country.
It has history on its side. And once the critics start announcing their awards, I think we will be hearing a whole lot more about Flags.
Email Post