Why Aren't We Hearing More About "Children of Men?" 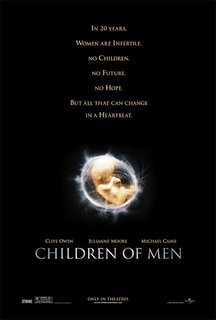 The trailer is simply amazing. When a trailer gives me chills like the trailer for Children of Men did, one can only hope that the film can live up to it. It's directed by Alfonso Cuaron (who helmed the third Harry Potter film and the acclaimed art-house hit, Y Tu Mamá También), and stars Clive Owen, Julianne Moore, and Michael Caine. Just on the grounds of the pedigree and trailer alone, this looks like it could be a major contender. Sure it's not due for release until Christmas, but I don't know why Universal isn't pushing this one. It's done fairly well in its run in the United Kingdom (where it has been in theaters for five weeks), racking up $8,861,962.
It's still early in the season, but For Your Consideration campaigns are starting up. If Universal starts promoting the film more in earnest, I think they could have a bona fide hit on their hands.
With that Philip K. Dick meets George Orwell vibe to it, a fascinating premise, and such a talented cast and crew, Children of Men could really go somewhere.
Click here to view the trailer.
Email Post