Countdown to the "Dreamgirls" Roadshow 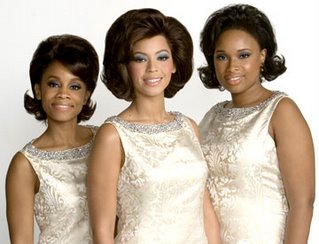 Dreamgirls may finally make its critical premier on Wednesday, but the roadshow opening is still a month away.

Variety reported last week that Dreamgirls will be unveiled like the prestige pictures of old, in New York, Los Angeles and San Francisco for $25 a seat.

Reaching into Hollywood's past for an old-fashioned marketing approach, DreamWorks and Paramount will throw a roadshow for "Dreamgirls" in Los Angeles, Gotham and San Francisco, charging $25 per reserved seat.

Roadshow kicks off Dec. 15 at the Cinerama Dome in Hollywood, New York's Zeigfeld Theater and the Metreon in San Francisco. Exclusive engagement will run 10 days, with one show per night and matinees added on the weekends. "Dreamgirls," based on the Broadway musical and directed by Bill Condon, opens wide Christmas Day.

Almost as old as the movie biz itself, roadshows were used as a way to build buzz before a movie went wide. It wasn't uncommon for movies to play in a roadshow for six to eight months, or, as with "The Sound of Music," even longer. Held in a few select cities, roadshows were designed to make moviegoing an event and more like a live theater experience, complete with intermission. Part of the mystique: higher-priced tickets and reserved seating.