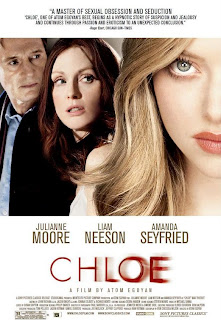 It is nearly impossible to examine, much less appreciate, Atom Egoyan's Chloe (a remake of the 2004 French thriller Nathalie...) without viewing it through the lens of high camp. It is a film that deals in the over the top, psycho-sexual histrionics of camp cinema, even while hiding beneath the veneer of glossy respectability. This is a soap opera, make no mistake; a classy soap opera, but a soap opera nonetheless.

Camp is generally seen as an aesthetic sensibility, defined by Susan Sontag in her 1964 essay, "Notes on 'Camp'" as seeing "everything in quotation marks. It's not a lamp, but a "lamp"; not a woman, but a "woman." To perceive Camp in objects and persons is to understand Being-as-Playing-a-Role. It is the farthest extension, in sensibility, of the metaphor of life as theater."

Chloe belongs to a more theatrical form of camp. Stylistically, it is a slick production, shot in the kind of softly lit, light tones so common to this sort of romantic drama. It is its attitude that defines its campiness, evoking a kind of emotional hysteria and sexual excess that borders on exploitation and soft-core pornography, but therein lies its deliciously trashy charm. 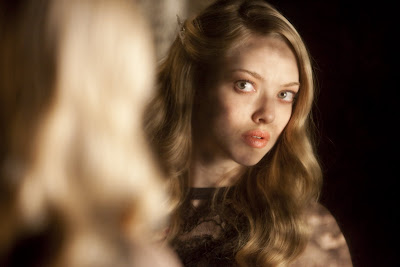 Amanda Seyfried as Chloe Photo taken by Rafy/Courtesy of Sony Pictures Classics
Part of the great joy of watching films like this is watching films like this is seeing great actresses unleash their inner diva, chewing into the emotional fireworks with passion and relish. For Julianne Moore, who stars as Catherine Stewart, Chloe is a showcase, and she more than rises to the challenge, turning in one of her finest performances; one that, remarkably, considering the surroundings, shows great emotional restraint. Catherine is a successful gynecologist with a picture-perfect life - a doting husband, David (Liam Neeson) and a handsome, athletic son Michael (Max Thieriot). She is in the middle of setting up a huge surprise birthday party for David, but at the last minute he misses his flight home, and the party must be canceled.

She is disappointed of course, but she understands. That is until she finds a mysterious text message on his cell phone the next day, and a photo of him with his arm around a beautiful young woman. So she turns to Chloe (Amanda Seyfried), an enigmatic young prostitute that she met and consoled in a restaurant bathroom, hiring her to present herself to David to temp him and see if his reaction confirms her greatest fears. The result leads to a strange relationship, as Chloe seduces David, and reports back to Catherine with graphic, minute by minute descriptions of their encounters, as Catherine listens, both enraptured and repulsed. Eventually, she is living her sexual relationship with her husband through Chloe, but it soon becomes clear that Chloe has other, much darker plans in mind, and by the time Catherine discovers them, the fabric of her entire family may be at risk. 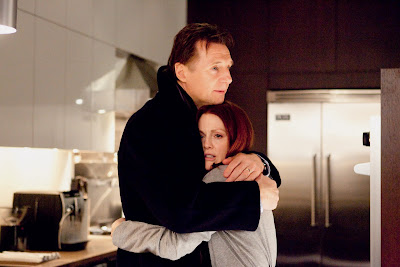 Left to Right: Liam Neeson as David Stewart, Julianne Moore as Catherine Stewart
Photo taken by Rafy/Courtesy of Sony Pictures Classics
Egoyan clothes his film in an air of high minded respectability, but let's not kid ourselves here - Chloe is trash. And it knows that. But it is its ultimate embracing of its more base, soap opera instincts that it succeeds. Moore owns this film, and while the rest of the cast more than hold their own, Moore is in a class by herself. Seyfried's wide-eyed innocence is perfect for the role, her pure beauty and confidence masking the troubled and scared girl beneath. But as a character, Chloe is the most problematic, falling victim to the screenplay's unfortunate penchant for awkward purple prose. While films such as this are often marked and defined by over the top dialogue, here it seems more of a hindrance, drawing away from the erotic emotional hysteria as classy adult drama facade.

As a whole, Chloe is a hard film to take completely seriously. But I also don't think it was meant to be looked at that way. This is a film that embraces its campy ridiculousness with stylistic restraint, and comes away as being a shamelessly entertaining mess.

Sam Juliano said…
Yes sir, dead on with this assessment too, although like you I kinda thought it was an entertaining guilty pleasure beckoning back to FATAL ATTRACTION. This is really beneath Egoyan though.
11:39 AM

Matthew Lucas said…
I actually probably enjoyed it a lot more than I should have, but I had fun with it. Not a great film, but as you say it's a guilty pleasure.
6:13 AM