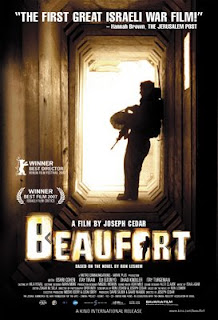 There is much discussion to be had on whether or not Joseph Cedar's Beaufort, the official Israeli submission to the 2007 Academy Awards, deserved its nomination for Best Foreign Language Film. After all, it was only chosen after Israel's first choice, The Band's Visit, was disqualified for having too much English dialogue.

There is no doubt for me which film should have been nominated. The Band's Visit is clearly the superior of the two. But with the choices given and the three nominees that I have seen, then Beaufort ends up being the winner that should have been.

I have not yet seen the Polish nominee, Katyn, or the Russian nominee, 12, but having seen Kazakhstan's Mongol (Picturehouse, 6.6) and Austria's The Counterfeiters (which went on to win the award), I can say that Beaufort is far and away the best choice of those films.

This is the movie that Jarhead wanted to be but never quite was. Beaufort tells the true story of the last squad of soldiers to occupy Israel's legendary Beaufort fort in Lebanon, in the days before the evacuation and eventual destruction of a piece of Israeli history that was captured from the Lebanese in 1982. 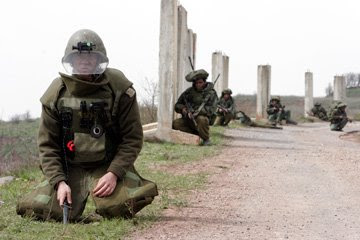 The soldiers are young and mostly inexperienced, and Hezbollah has stepped up mortar attacks on the fort in order to make it appear as though the Israelis are leaving in humiliated defeat. As more and more soldiers die and the rumored evacuation looms ever closer, fear and ennui begin to set in, leaving the young men to sit and wait for a defeat they can't stop, in a conflict they can do nothing about.

There are many parallels to be made between this and the current war in Iraq. The feeling of helplessness felt by the soldiers begins to boil over, and as their friends die around them they begin to lose hope in themselves and their own survival. 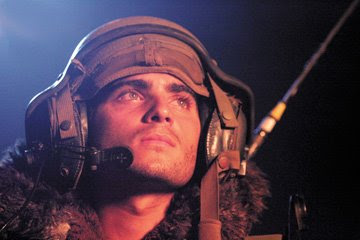 Cedar does a masterful job of creating a palpable tension that is nothing short of gripping. Beaufort isn't so much a war movie as it is a character study - a psychological examination of soldiers under extreme stress while politicians decide their fate hundreds of miles away. The labyrinthine tunnels of the fort become a kind of prison to the point they seem to be more for holding the soldiers in than for keeping enemies out, and the eerie presence of mannequin soldiers meant for drawing fire from hostile forces serve as a haunting metaphor for the creeping emptiness felt by the soldiers, who are no longer fighting for a cause they can put into words, but are forced to sit and wait for an inevitable end that is out of their control.

All politics aside, Beaufort takes a searing look at male relationships and the psychological effects of war in a subtle and stirring way. There is no preaching or pontificating here, just young men with a lifetime ahead of them, forced to wait in hell while their fates are decided for them by men in air conditions rooms.

Anonymous said…
Agreed, and it really is a fantastic film.
8:41 AM

Daniel said…
Interesting. I skipped it at the MPSIFF. I kind of like The Counterfeiters, so this intrigues me.
6:09 PM

Matthew Lucas said…
I like "The Counterfeiters," but didn't think it was good enough to be named the best foreign language film of the year. After seeing "Beaufort," my feelings have been confirmed.
12:54 AM