Jeff Wells' second take on Indiana Jones and the Kingdom of the Crystal Skull is, I think, spot-on. When saw the film the first time last Tuesday with an audience of critics and lucky radio/television contest winners, I totally went with it and had a blast. 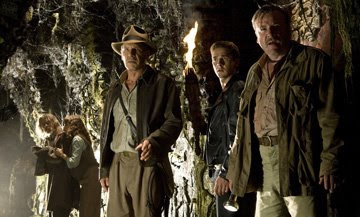 I still had fun on Sunday evening when I went out with friends to see it with a paying audience. But this time the films flaws seemed more glaring to me. The Shia LeBeouf "Tarzan" moment, the ease with which they find the crystal skull, Ray Winstone's character, the overall scattershot nature of the plot, and the moments that are pretty ridiculous even by Indiana Jones standards (the boat in the tree).

Yesterday's second viewing convinced me that it's just too silly and George Lucas-y. Anyone who had a fairly good time after seeing it last week or weekend....don't go a second time! No film infected with the Lucas-collaboration virus ages like fine wine. Precisely the opposite, in fact.

That pretty much nails it. I stand by my three star grade, but it doesn't really hold up to repeat viewings the way the originals do. It's a one-time through sort of deal. Just surrender to it, enjoy the ride, and leave it at that.
Email Post