I didn't love it either. In fact I alternated between being totally bored and actually enjoying myself. The only thing I hated was the younger brother, because I thought the movie took a nose dive every time he came on screen, and I started loathing the entire affair. Then he went away and my enjoyment level climbed.

I think the movie suffers from multiple-personality syndrome. It jumps from manic silliness to some exciting action scenes to headache inducing video-game special effects to moments that border on moving - it was up and down and I was in and out the whole time, sometimes hating it, sometimes actually getting into it and going with the flow. 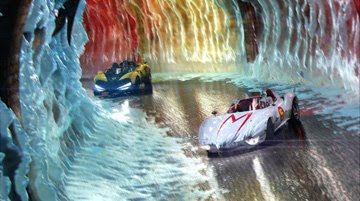 I loved John Goodman, who was the highlight of the film for me. But ultimately I felt like the Wachowskis bit off more than they could chew. For one, it's way too long, and the subplot with the older brother just didn't jive, and ends aimlessly.

In the end, I left with a positive impression, with lots of reservations. It's likable in a goofy, 8 year old with attention deficit disorder sort of way. It's not as horrible as I expected to be, but its not as good as the orgasmic fan boys or stuck up, against the grain just to be different bloggers have made it out to be. I give it a solid 2 and a half stars.

Which is the same rating I gave Juno, just for the record.

I had a feeling you might not HATE it, and I still really want to see it.

"but its not as good as the orgasmic fan boys or stuck up, against the grain just to be different bloggers have made it out to be." I do not expect it to be, some of the reviews out there just scream "get a God damn LIFE."

Enjoy Young@Heart and The Visitor - making me seven shades of jealous.
3:00 AM

Daniel said…
Great write-up here, Matthew. You straddle the line and provide evidence that I completely connect with, but ultimately I lean to the positive because of the sheer scope of the racing sequences.
2:43 PM