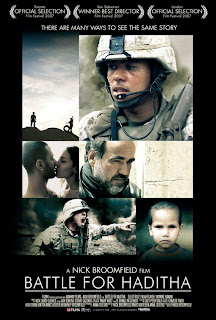 Hollywood-Elsewhere's Jeff Wells posted a favorable notice of Nick Broomfield's Battle for Haditha yesterday, and having seen the film I have to offer a hearty agreement.

Battle for Haditha is the best combat film to come out of the Iraqi conflict so far. This is Iraq's Black Hawk Down, with one key difference - Broomfield has the balls and the heart to examine this conflict and its ramifications from all sides, and he does so with a rare and welcome humanity.

Based on a true story, Battle for Haditha dramatizes a horrific incident in 2005 where a group of United States Marines slaughtered 24 innocent Iraqi civilians in retaliation for a road side bomb attack that killed one of their own and injured two others.

Needless to say this is heavy stuff, and it isn't easy to watch. In fact it's also probably the most disturbing narrative film yet to emerge from the new Iraq war.

But what makes it so unique and so singularly powerful is that Broomfield takes a deliberately ambiguous and even-handed stance. He shows the conflict warts and all, with every nuance and moral complication made crystal clear. 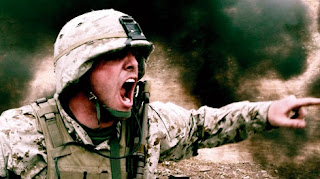 The roadside bomb that sets the whole affair in motion is planted by a former Iraqi soldier and his young friend Jafar. Bitter over the disillusion of the Iraqi army, he begrudgingly agrees to help al-Qaeda in order to continue fighting to protect his country from what he sees as a hostile invasion.

The people who end up bearing the brunt of the American retaliation are a family celebrating the circumcision of a young boy, who just happen to live right across from where the IED is planted. Faced with retaliation from al-Qaeda if they warn the Americans about the bomb, or accusations of being insurgent collaborators by the Americans if they don't, the family remains silent. But when several family members end up being in the wrong place at the wrong time when the bomb goes off, they are immediately blamed and shot down in the streets, causing a distressed family member to begin firing from the roof of his home. It's all downhill from there, as eventually a once peaceful family becomes radicalized by the massacre that is perpetuated upon it.

Broomfield displays a key understanding of Middle Eastern affairs, and has a keen ability to find the humanity in each of his characters. There are no hoary stereotypes to be found in Battle for Haditha. Instead, he examines the motives of each person, and how misunderstandings and misguided intentions lead to disaster. 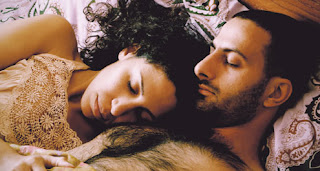 The Americans believe they are protecting freedom, while the insurgents see themselves as protecting their country and their families from a hostile invasion that has destroyed its infrastructure. With a country in shambles they are looking for stability, and there is none to be found. It is a vicious cycle of violence and death caused by a cultural difference as wide and as deep as the Pacific Ocean.

I have a feeling that this is the film Brian De Palma was trying to make with Redacted last year, but didn't quite succeed. Despite my respect for that film, it was very obviously flawed. Battle for Haditha is a much more focused and streamlined film, and ultimately a more effective one. Using raw performances from a mostly non-professional cast, Broomfield has crafted a powerful and haunting look into the key conflict of our time, and has emerged with some profound and essential truths that demand to be heard. This is one of the landmark films of this seminal point in our history, crying out not only for peace, but for understanding. We are now in a global conflict of our own making, and it is because of our actions that it continues to rage.

Battle for Haditha acknowledges this with a calm and even hand that cannot be ignored. Nor should it. Of all the Iraq themed films of recent years, this is the one that should be remembered.