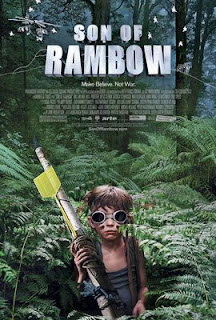 It seems like everyone dreams of making movies as a child. Some go on to fulfill that dream, some forget about it and move on to more practical things. And some put their plan into action as soon as possible.

Son of Rambow tells the story of two young boys in 1980s Britain, watch a pirated copy of the original Rambo movie First Blood, and decide to make a sequel of their own.

The two boys make for the unlikliest of pairings. Lee (Will Poulter) is a parent-less child delinquent who lives in the back of a nursing home with his punk teenage brother. Will (Bill Milner) is a sheltered, naive boy living in a repressive religious home, who dreams of creating moving images, spending his time doodling all over the pages of his Bible rather than reading it.

Will is not allowed to watch TV, and as such is always asked to leave the classroom when the class is going to watch an instructional video. It is in one of these lonely hall-sittings that Will meets Lee, who has just been sent out in the hall for punishment.

Having never even seen television before, watching Lee's pirated copy of First Blood that he filmed for his brother to sell, exposes Will to a whole new world that blows his dreams wide open, where suddenly anything can happen and magic comes to life. 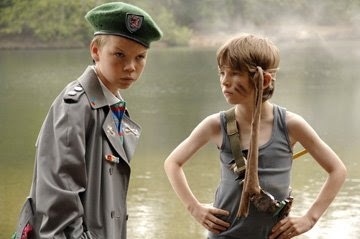 Son of Rambow is a nostalgic trip through through a simpler time and a simpler mindset, with a true childlike view of the world. But even deeper than that, it is a celebration of the power and magic of cinema.

The movies these boys make may be hilariously inept, but it is a labor of love. And as the group of young filmmakers grows, tempers flare and conflicts arise, but the final product is a true communal effort born out of blood, sweat, and tears. Just like real filmmaking.

Son of Rambow isn't always even, and all the dots don't always connect, but it is so full of singular charm peppered with just enough edge that it's impossible not to fall in love with. 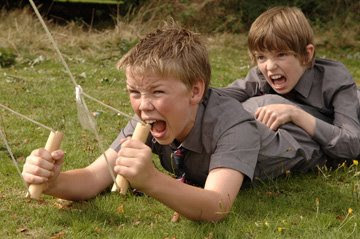 It would be easy to call it adorable, but I don't think that quite fits it. Director Garth Jennings (The Hitchhiker's Guide to the Galaxy) knows that children aren't saints, and gives the film a sweet and sour twang to keep it from becoming syrupy or maudlin.

The performances by the two lead children are first rate, especially for their first feature film. Both Poulter and Milner are wholly believable in their respective roles.

The most important thing though, is that they throw themselves whole heartedly into the world Jennings has created. It is a world of imagination, filled with endless possibility. It is infused with that sense of childlike wonder that so many of us lose after we grow up, and spend the rest of our life trying to recapture.

Son of Rambow is pure movie magic, served up in a pint-sized portion from the most unlikely of sources.

Anonymous said…
OOOOOOOOOOOOO, I cannot wait to see this!!!!
5:13 AM

Anonymous said…
"it is so full of singular charm peppered with just enough edge that it's impossible not to fall in love with."

That about sums it up right there.