Review: "Up the Yangtze" 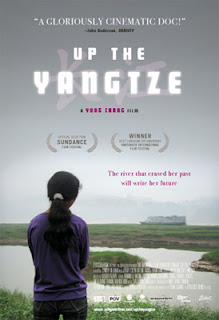 As I said in my review of Stephen Walker's excellent documentary, Young @ Heart, "The best documentaries explore worlds, cultures, and situations that have not seen before, illuminating things we have never seen or pondered."

In Yung Chang's haunting new doc, Up the Yangtze, we are transported not only to an old China that is quickly fading into the past, but a new China where progress threatens to overwhelm tradition.

The film centers around the construction of the Three Gorges Dam on the Yangtze River, which will turn the river into a lake in many areas, swallowing up entire towns and forcing the relocation of thousands of people.

Among these people is the family of Shui Yu, a 16 year old girl who dreams of going to university to become a scientist, but her poor, farming family barely has enough money to feed itself, let alone send her to college. So she goes to work on a cruise ship that sails the Yangtze River, taking mostly American tourists on what is called the "Farewell Tour," carrying its passengers up the Yangtze to see the historic sites and natural beauty that is soon to be swallowed up by the rising flood waters. 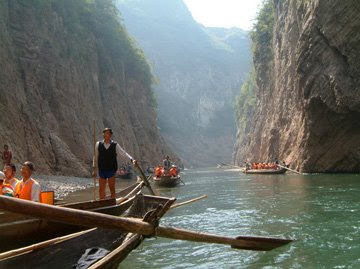 Up the Yangtze is, first and foremost, a requiem for a China that is slowly being washed away, both in reality and metaphorically. The Three Gorges Dam was a pet project of Mao Tse Dong, and represents progress for the sake of progress. While some on the river praise it for its technical mastery (it is the largest dam in the world) and the glory it brings on the country, in reality it is destroying lives - the ultimate symbol of empty, useless progress. The people are powerless to stop it as it washes away their memories of a mythic past.

Chang's grandfather even says he no longer recognizes the China he once knew, the traditions being increasingly swallowed by the hungry river of technological progress. 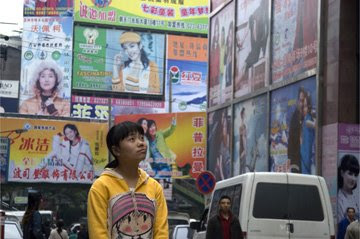 Shui Yu and her family place a human face on the situation. Their house is going to be flooded, but they cannot afford to move. So they stay in a hut near the river and farm for a living, hoping her job on the cruise ship will give her the money she needs to continue her education. But the cruise and its hoary tourist commercialism is hard to bear. Watching clueless Americans show how ignorant we can be is always painful, but seeing how we turn other people's pain into the objects of fascinated gawking, and in turn how this is exploited for profit, is almost unbearable. There are a few shining lights who manage to see through some of the more blatant propaganda (such as one lady who questions a tour guide about what happens to the people who did not get into the nice relocation apartments that are so proudly showcased to visitors), but for the most part they're pretty much what you would expect.

Chang never exploits or pushes this at all, though. One of the film's great strengths is its ability to step back and observe. He lets the natural beauty and tragedy of the story speak for itself. The river has its own story to tell, and Chang knows how to listen to its ebb and flow, winding its way through the ages until running up against the cold gray concrete of progress. Up the Yangtze is a poignant reminder of the human, natural, and historical cost of technological advancement, where the price is not only tangible, but the very soul of a nation.