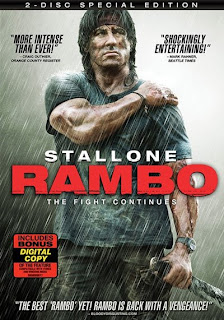 Is it bad that I went straight out yesterday and picked up my copy of the 2-disc special edition of Rambo on the day it was released, and then watched it for a third time?

Maybe. But I don't care. I have an absolutely irrational love for this movie that I can probably never really explain. It's politics are questionable at best, deplorable at worst, but damn it's fun.

This isn't the kind of movie I generally go for at all. I generally prefer thoughtful, enriching dramas and films that push the bounds of cinema. But there's just something about Stallone's gleefully over the top bloodletting that is oddly entertaining, in a junk-food, guilty pleasure sort of way. 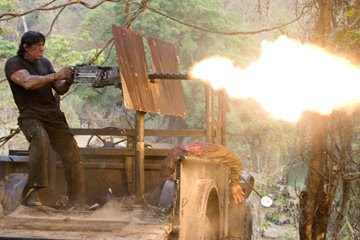 Jeff Wells hit the nail on the head when he said "It's so relentlessly blunt, so absurdly violent in a '70s exploitation vein, so visceral and depraved and elbow-deep in jungle blood & guts that I loved it...Rambo 'works' in its own deranged way. It's like an ultra-violent half-time show at the Super Bowl. It's shit, of course, but it's fast, fun and agreeably grotesque."

I couldn't have said it better myself.
Email Post

Anonymous said…
I still want to see this some day. Mainly because of your love for it, I am immune to this kind of "fun," but I could be wrong. I will see it eventually.
4:04 AM

Matthew Lucas said…
I thought I was immune to it too. Then I saw it. I must have been in a weird mood. We were pretty much the only ones in the theater, and I kept leaning over and going "RAMBO!!!!" in my friend's ear every time he appeared on screen.