Herzog and Lynch Team Up for Murder Drama 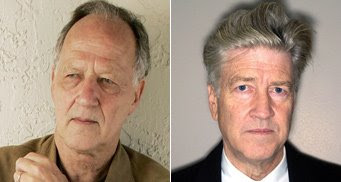 Werner Herzog (left) and David Lynch
From The Hollywood Reporter:

CANNES -- Werner Herzog and David Lynch are teaming for "My Son, My Son," a horror-tinged murder drama based on a true story. Herzog and his longtime assistant director Herbert Golder co-wrote "Son," loosely based on the true story of a San Diego man who acts out a Sophocles play in his mind and kills his mother with a sword. The low-budget feature will flash back and forth from the murder scene to the disturbed man's story. A guerrilla-style digital video shoot on Coronado Island is tentatively set for March.

Oh. My. God. I think this just made my day. David Lynch is God as far as I'm concerned, and teaming him up with Werner Herzog, another one of the greats, seems like a minor miracle.

Of course, since they both have such distinct styles and personalities, this could end up being a disaster. But hey, I can hope can't I?
Email Post

J.D. said…
Wow. That might just explode the collective mind of humanity. Wow.
1:48 AM

Matthew Lucas said…
Agreed. I fully expect my mind to be blown. I might melt.
2:00 AM

Anonymous said…
given the two involved, perhaps, as they say, a noble failure?

How will these two egos get along?

Herzog hasn't had a foil worth his own obsessions since Kinski died. Lynch is just as nuts ...
11:52 AM