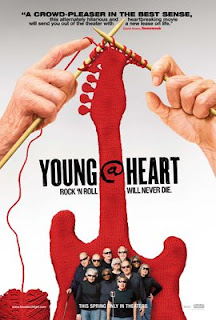 Everyone has a picture of what they want to be like when they're in their twilight years. We all say "well I'll never be like that" or "I want to be like that." The reality ends up looking quite different most of the time, but the members of the Young at Heart Chorus have fulfilled that by becoming the coolest old people around.

This is not your average senior citizens chorus. No, instead of singing old time gospel hymns, the Young at Heart chorus sings everything from classic rock to punk, from James Brown to Sonic Youth, rocking the stage with the energy and a zest for life of a person half their age. The average age of a chorus member? 80.

Young @ Heart is a documentary by Stephen Walker that chronicles the seven week process of rehearsing for the first show in a the chorus' latest tour. Along the way, we witness the trials and tribulations of putting together a show when all of your performers are over 70, and most don't even like the type of music they're singing.

We get to meet a great deal of the singers, and we get to know them over the course of the film. Once we get past the initial giggles of seeing octogenarians rocking out to "I Feel Good" (imagine watching your grandparents jamming to Saturday Night Fever) we begin to see the chorus for what it really is - not a tongue in cheek joke, but a last hurrah in a full life. The members are so vibrant, so full of life, and the chorus gives them a goal to keep them going, even when their health begins to get in the way. 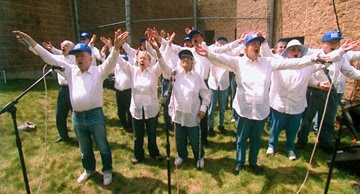 The film's only big flaw is Walker's incessant narration and questions, which border on inane at times, but when he steps back and lets the chorus members tell their own story, Young @ Heart soars. This is true inspirational filmmaking, the kind that makes you want to stand up and cheer. I have not cried so much or so hard during any other film this year. 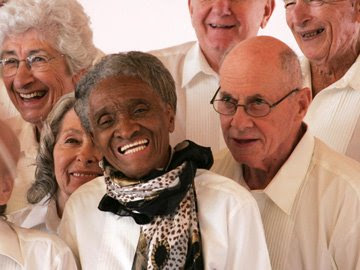 The best documentaries explore worlds, cultures, and situations that have not seen before, illuminating things we have never seen or pondered. Young @ Heart takes us behind the scenes for a very unique and special experience with a very unique and special group of people. The chorus members' enthusiasm and energy is infectious, and I defy anyone not to be roused and moved by this film. It is impossible not to like.

Just when you think you've seen it all, here come the rock n' roll grandparents who become the year's most unlikely cinematic heroes and its most endearing cast of characters. I would back any one of them over Iron Man any day. Young @ Heart is a joyous celebration of life and music that will send you out of the theater with a smile on your face and a song in your heart.

Daniel said…
Great review, Matthew. I also found it extremely emotional. I doubt anything else will reach me so deeply in 2008.
7:18 PM