I've always been a big advocate of critics watching films in their entirety, because they can't have a well-formed opinion unless they have, no matter how bad the movie is. 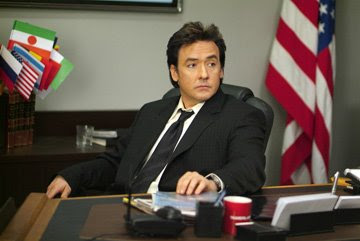 I have never walked out of a film. I don't care how bad a movie is, I will stay and finish it so I know what I'm talking about when I trash it later. But I tried to sit through Joshua Seftel's war/corporate corruption satire, War, Inc. (which opened today in limited release), and I just couldn't make it through.

I watched about 40 of the films 104 minutes, and I had absolutely no interest in continuing. It doesn't count as a walk out because it was a screener copy, but I found nothing in the movie worth continuing to watch it.

It has a interesting premise - John Cusack stars as a corporate assassin working for a corporation run by a former Vice President (Dan Aykroyd), who are waging the world's first privatized war in the fictional country of Turaqistan. It's heart is in the right place but it's all painfully obvious and ham fisted. There is no sting to its satirical tongue because it is so blunt and contrived.

I just didn't feel like wasting anymore time on it. There are far too many more films I want to see to be bothered with this sort of drivel. Has anyone seen this? Does it get better? Or did I get pretty much the correct impression of it?

I don't care enough to ever revisit it to find out.
Email Post