None of this will probably ever make it in my review (to be published Thursday), but my initial reaction after seeing The Chronicles of Narnia: Prince Caspian, was one of extreme annoyance. It wasn't so much the weaker story (which isn't really the movie's fault), or the banal pop song that serves as the film's finale. No, what really pissed me off about Prince Caspian was the film's messianic lion, Aslan. 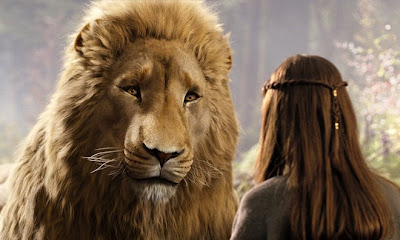 In The Lion, the Witch, and the Wardrobe, Aslan served as an allegorical representation of Jesus, as per the original novel by renowned Christian author C.S. Lewis. In Prince Caspian, however, Aslan more resembles the God of the Old Testament (except not quite as jerkish), explaining his 1,300 absence (during which Narnia was conquered and its people almost totally wiped out) and why he did nothing to stop it with a pat "nothing works the same way twice," along with some other "mysterious ways" mumbo jumbo.

That is pure and utter bullshit. It ends up being all about faith of course. Lucy has faith in Aslan when no one else does, so he returns to save the day. WTF? So, he allows how many hundreds of thousands to be slaughtered into near extinction over a period of 1,300 years, when he most certainly had the power to return, but doesn't until a little girl has faith? I call bullshit.

Of course it fits it with Christian theology, but that pisses me off too. How can I pull for a hero who allowed such horrible things to happen just so he could return in some kind of dogmatic recourse of his own devising? He's playing by his own rules. And they suck.
Email Post