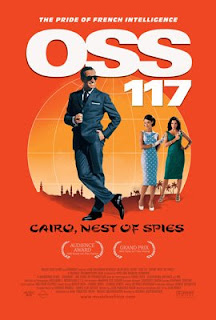 In a world (cue Don Lafontaine voice here) where the putrid likes of Meet the Spartans and Epic Movie clog our multiplexes, apparently making enough money to justify the creation of more low brow genre spoofs, a hero must rise up to reclaim a genre once held in esteem by the likes of Mel Brooks and Airplane!. And that hero is none other than OSS 117, the hilariously inept French spy who has been sent to Cairo by the French government to solve the murder of his friend and former partner, ensure Western control of the Suez Canal, and to single handedly achieve peace in the middle east.

And that's just the tip of the iceberg in Michel Hazanavicius' delightlful French spy send-up, OSS 117: Cairo, Nest of Spies. OSS 117, as played to oily perfection by Jean Dujardin, is like a mash up of James Bond and Jacques Tati's Monsieur Hulot. He is arrogant, ignorant, culturally insensitive, and all around clueless. But he somehow always manages to get the job done, even if it's by accident.

The entire film has the look and feel of an old 1960s spy thriller, right down to the overripe color palate to the rear projection behind cars to create the illusion of movement. Most modern spoofs focus on making ironic pop culture references and lampooning specific films, without ever really capturing the flavor of the genre it is sending up. Hazanavicius perfectly captures the look and feel of these old spy films, while slyly skewering the conventions of the genre. 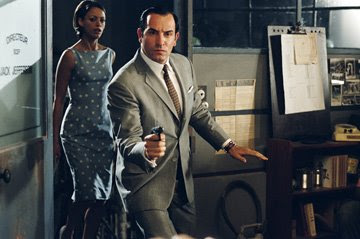 It's all very tongue in cheek of course. The film nails the sometimes self-important atmosphere of its genre, and provides some of the biggest laughs of any film I have seen this year. Durjadin is wonderful as OSS 117 (love those eyebrows!), and he is the very embodiment of the ignorant westerner, with slicked back hair that never gets messed up.

Which is another point the movie nails very well. Not only is it a genre spoof, but it is a pointed satire of Western ignorance about Middle Eastern culture ("what kind of stupid religion doesn't allow alcohol?" 117 scornfully asks his Muslim secretary after she says drinking is against her religion). The film is never directly political, but it finds great comic material in Western ignorance. 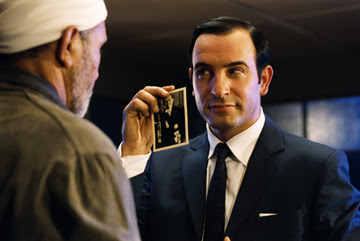 Leave it to the French to show how to do a genre spoof right, because I haven't seen a funnier film all year.

Daniel said…
I couldn't agree more with what you say in your last paragraph. High comedy all around.
1:52 PM

Anonymous said…
Yes, a good film, and the period feel was marvellous.
To be recommended, paces itself well, all the way to the "cat-fight" at the end.
Magnifique!
4:15 PM