For a movie inexplicably poised at an all too low 52% positive rating at Rotten Tomatoes, the New York Times' Manohla Dargis has written an eloquent and spot-on positive review of Nick Broomfield's Battle for Haditha:

“Battle for Haditha” isn’t a jeremiad against the war, the American administration or even the quick-triggered marines. Rather, with dry-eyed intelligence, he takes the killings at Haditha and returns the incident to the historical moment from which it has been removed by politics and propaganda. He points fingers, suggests reasons and explores rationales, showing sympathy for the war-ravaged marines without letting them off the hook. He introduces the insurgents who planted the bomb that killed a marine, apparently precipitating the massacre by the dead man’s squad. And then with sickening realism, he shows how those innocent Iraqis, caught between the insurgents and the marines, died.

She also points out one of the film's few but glaring flaws, which has to do with the improvised dialogue that tends to veer into overcooked exposition. 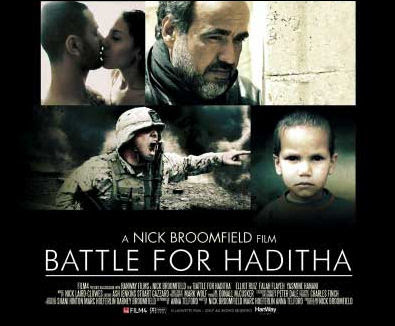 But flaws such as that can be easily overlooked, and indeed cease to matter in a film of such disarming verisimilitude. Variety's Robert Koehler even goes so far as to compare the film to Gillo Pontecorvo's classic Battle of Algiers in its cinéma-vérité roots.

He also rightly compares it to Brian De Palma's unfairly maligned Redacted, but as I did in my own review, acknowledges its clear superiority:

Politically, Broomfield's is far more humanist and less strident, refusing to convey soldiers in blunt good guy-bad guy terms, while granting much dramatic space to the lives of civilian onlookers and insurgents --nonexistent in DePalma's docudrama.

I am one of the few who actually liked Redacted, for its sheer audaciousness, but I admit that the film is much more of a knee-jerk polemic, even if I find it to be very representative of the prevailing anger permeating beneath the surface of the American public in regards to the war in Iraq.

Battle for Haditha is most notable for its even-handedness by showing the conflict from all sides - the Marines, the insurgents, and the slaughtered civilians are all given equal screen time and character development, each becoming their own person with their own stories, which in many ways makes Haditha unique not only in terms of Iraq war movies, but in war movies as a whole. It's almost as if it is Flags of Our Fathers and Letters from Iwo Jima combined into one film (though admittedly, it's not on the level of either one). Each side has its own story, its own flaws, and its own legitimate point of view - no matter how misguided it may ultimately be.

No other narrative film has yet captured the complexities of the war in Iraq as well or as powerfully as Battle for Haditha, and I think New York Magazine's David Edelstein has made the most astute comparison yet:

Battle for Haditha has some of the raw energy of Sam Fuller's war pictures, which weren't subtle but left you energized by their ambivalence (there was no good or evil). It's a hell of a picture.

Anyone who has ever seen Fuller's The Steel Helmet (1951) will know exactly what he's talking about. That film took on the Korean war with a clear-eyed grittiness that was one of the first American films to dare to be anti-war in the middle of an ongoing conflict, showing the war for the futile exercise it was, while giving a human face to an enemy that is far easier to dehumanize and paint as pure evil. Battle for Haditha does just that.

Real life is never that black and white. Why should our movies be any different?
Email Post