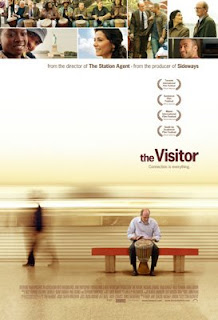 Walter Vale (Richard Jenkins) is a lonely college professor who tells everyone he is busy writing his fourth book when he is asked to do something. But the reality is that Walter hasn't been busy for a very long time. In fact, ever since the death of his wife, he has been lost in his own solitude, unable to find meaning in a life he finds empty.

So when he is saddled with an out of town conference he can't talk his way out of, he gets in his car and heads from his home in Connecticut to his old apartment in New York where he and his wife used to live to present a paper at a conference for professors.

When he arrives, however, he discovers that his apartment is being inhabited by two illegal immigrants, a Palestinian drummer named Tarek (Haaz Sleiman) and his Senegalese girlfriend named Zainab (Danai Gurira), who unknowingly rented the apartment from a crooked landlord with no rights to the property.

Walter decides to allow the two to stay until they find a more permanent place to stay, and begins to get to know and eventually befriend the couple. Walter, a music enthusiast who had been struggling unsuccessfully with piano lessons since the death of his wife (who was a famous classical pianist) begins to learn how to play the drums from Tarik, and finds his life opening up in ways he no longer thought possible. For the first time in ages, he is alive. 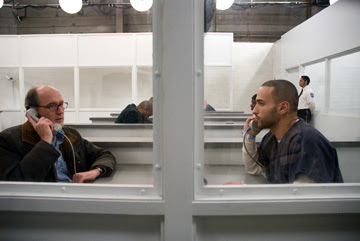 Until, during a misunderstanding in the subway, Tarik is arrested and taken to a detention center for illegal aliens. Soon, Tarik's mother (Hiam Abbas) arrives from Michigan, and Walter is faced with losing his one friend to an uncaring immigration system riffled with fears of terrorism in a post-9/11 world, and his burgeoning feelings for Tarik's beleaguered mother.

Director Thomas McCarthy's last film, The Station Agent, was an impressive, beautifully burnished debut filled with indie quirk and charm. Here McCarthy trades in the quirk for a nagging sense of melancholic gloom, punctuated by warm hearted connections between kindred spirits from two vastly disparate backgrounds. McCarthy still falls back into some typical indie crutches - the early scenes depicting Vale's lonely existence are straight out of the independent film handbook. But soon The Visitor finds its groove, and settles into something truly beautiful and deeply moving.

Richard Jenkins, who has always been a reliable character actor in films like The Kingdom and North Country, is a revelation as Vale, slipping into his role like an old, well-worn cardigan. You can feel the weight on his shoulders, and you can see it gradually lift as Tarik begins to show him how to live again. Hiam Abbas (The Nativity Story, Munich) is also terrific as Tarik's world weary mother, haunted by a decision that doomed her to a life of looking over her shoulder in fear of being deported back to Syria, where her husband was imprisoned as a political enemy of the state. 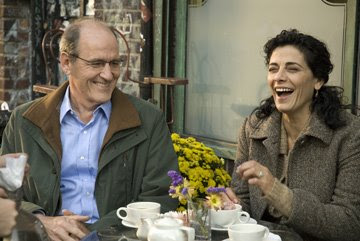 The entire film is overshadowed by a deep feeling of loneliness, made even deeper by Jan A.P. Kaczmarek's poignant, piano driven score, that also weaves in a subtle percussive element unusual for the composer, but wholly appropriate given the importance of drums to the story. Which, surprisingly, is not political at all. Rather, it is a character study about random connections and learning to move on. Both are indie staples of course, but here Jenkins paints a deeply humanistic picture of interaction between wounded people who just happen to be of different nationalities and backgrounds. It is not their country of origin or the color of their skin that matters, it is the connection they forge that will last a lifetime, and it goes beyond the cold label of "legal" or "illegal."

There are no illegal human beings, and McCarthy knows this. He has made a haunting, gentle film about humanity post-9/11; lonely, confused, and searching for meaning and connection in an increasingly confusing and chaotic world. He never hammers his point in or rubs the audience's face in it. Rather, he allows the characters and their stories to speak for themselves. The initial set-up that sets it all in motion may be dubious, but once it finds its footing, The Visitor is hard to shake. McCarthy is a talent we'll be watching for quite some time.

Anonymous said…
Indeed Matthew! THE VISITOR is very hard to shake! Terrificly perceptive review. Methinks this may well be the best film of the year as we near the halfway point.
2:39 PM