First Impressions: "Indiana Jones and the Kingdom of the Crystal Skull" 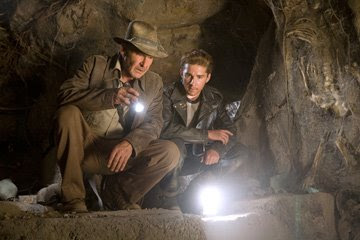 Now that it's officially opening day, and the first commercial screenings of the first Indiana Jones adventure in nearly two decades are unspooling as I write this, I can finally talk about Indiana Jones and the Kingdom of the Crystal Skull.

Ultimately, I liked the film. Scratch that, I had a blast. Spielberg has really delivered the goods on this one. I don't think it is as good as any of the original three (that includes Temple of Doom), but it is highly enjoyable. Parts of it have a more "trip down memory lane" vibe, but it's one of the most entertaining trips down memory lane I've ever had.

The plot (which I will not go into much detail about here) seems much more outlandish that the originals on first glance. But then upon reflection, it's main premise is actually probably more plausible than the Jewish, Hindu, and Christian mythology that made up the supernatural plots of the originals.

I miss the old school special effects of the originals. CGI is not replacement for the way things were done then, at least in this case. That is one of the biggest differences that separates Crystal Skull from its predecessors. It works in a modern context, but I just don't think that an Indiana Jones film should have that much CGI, no matter how impressive it is.

But I really did like the film. It isn't perfect, but I don't think anyone expected it to be. Spielberg and Ford handle the issue of Indy's age very well, and get a lot of mileage out of it. Cate Blanchett is obviously having a grand time in her villainous role, and its nice to see Karen Allen back after all these years. I especially like how the film revisited so much from Raiders of the Lost Ark.

I'll be tapping out a full review for next week's Dispatch. But for now, go out and see it for yourselves. I myself will be back in a theater to see it again tonight.

Anonymous said…
I am seeing this in an hour or so, cannot wait!
9:00 AM