I feel nothing but extreme indifference towards the Wachowski brothers' upcoming Speed Racer (Warner, 5.9). After seeing what a mess they made of the Matrix trilogy by the time they got to Revolutions (or as Anthony Zerbe calls it, Shot), I just can't get excited about anything they do. I even found V for Vendetta to be merely mediocre, even if they just produced it. 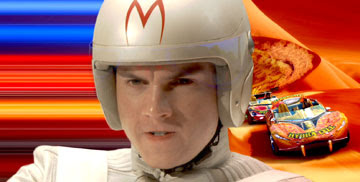 Every trailer or advertisement I have seen for Speed Racer gives off an overstuffed Happy Meal set CG flick vibe a la Spy Kids. I will see the film this weekend and review it for next week, but I'm not particularly happy about it. It looks like two hours of torture, and its 32% positive rating on Rotten Tomatoes doesn't bode well.

I smell a bomb in the making, but I will reserve ultimate judgment until I have seen it for myself.
Email Post

Anonymous said…
Well - I am really hopeful for the film.

Two of my fav stars: Emile Hirsch and Christina Ricci....

and all those pretty colours.