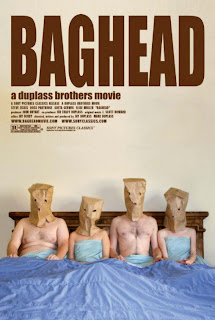 OK, raise your hands if you've heard of the Mumblecore movement. Anyone? Creepy longhaired guy in the back? You? OK, that's what I thought.

Honestly, I hadn't either until I came across the Duplass brothers' Baghead. I had probably read the term somewhere and didn't know what it was, and it didn't seem important enough to seek out. And having now seen a Mumblecore film, I'm not really that motivated to seek out any more.

Mumblecore is a movement in American independent film emphasize improvisation and a shot on the fly, do it yourself aesthetic. The movement has spawned such films as Hannah Takes the Stairs, Frownland, and In Search of a Midnight Kiss.

Baghead follows four out of work, twentysomething actors who decide to head out to a cabin in the woods for a creative retreat, to write a screenplay for their own movie to get themselves back in the game. But instead the find themselves partying and having romantic trysts, until a mysterious man with a bag over his head shows up, with a very big knife. 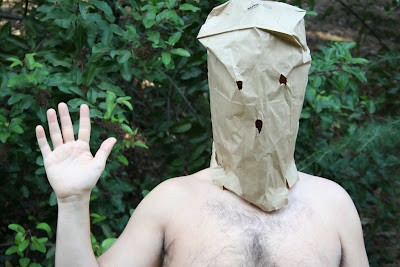 Yeah it all sounds rather uninspired. But giving credit where credit is due, Baghead isn't your typical slasher film. Far from it.

Part horror, part comedy, Baghead is something of an unusual hybrid. It never reaches for goofy slapstick like Scary Movie and its ilk, and the horror elements are actually quite effective. Where Baghead stumbles is in the relationships between the characters, which due to the mostly improvised dialogue, just don't exist. These have got to be the most boring twentysomethings ever. Most of their banter is dull and insipid, and quite often I found myself going "yeah right." How many straight guys are going to get all hot and bothered with a cute blond, then excuse himself to go masturbate upstairs instead? I don't care if he promised his friend he would leave her alone, it just doesn't work. 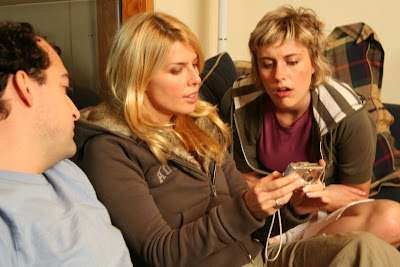 That's the biggest problem with the film - the stiff and stilted nature of the improvisation and slapdash structure. Without script or direction, the film meanders dangerously, leaving long stretches of emptiness between the more effective scare moments.

I applaud the directors for what they were trying to do. But in the end they were only partially successful. Perhaps with a little more structure, a lean little indie like Baghead would be much more successful in bucking the status quo.

Anonymous said…
I gave it even less, but we're on the same wave length here, your cogent observations and insights are ubiquitous as always.

You are amazingly prolific as of late. Kudos to you.
3:19 PM

Matthew Lucas said…
I feel like I'm cramming for a test, trying to get as many films in by the end of the year. It's much easier while I'm at home on break and all my friends are scattered to their various homes across the state to spend more time blogging and movie watching. Once school starts back I won't have this kind of time anymore.
3:27 PM