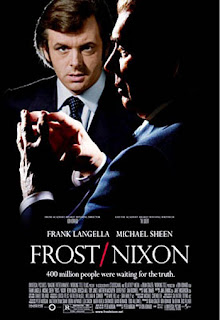 For all of his commercial successes, I have only ever regarded Ron Howard as a competent, middlebrow craftsman. His movies tend to be well made but generally unextraordinary, leaning more toward quality commercial work than works of art.

While his latest film, Frost/Nixon, may not be a work of art, it is arguably Howard's most solid and grounded work to date.

This is due in large part to his considerable source material in Peter Morgan's crackerjack screenplay, adapted from his own, Tony award winning play of the same name.

Frost/Nixon tells the story of David Frost (Michael Sheen), a British television show host who may be most closely compared to Jon Stewart in today's pop culture. Frost was struggling to keep his show and looking for a big break, which he found in Richard Nixon (Frank Langella), the disgraced and recently resigned President of the United States.

Having been out of the public eye for three years, Nixon is looking for a way to absolve himself to the people, and restore his tarnished legacy. Nixon views the interview with Frost as a softball, easy platform with which to clear his name. Frost and his associates, however, are determined to convict Nixon on national TV in the trial that he never had. 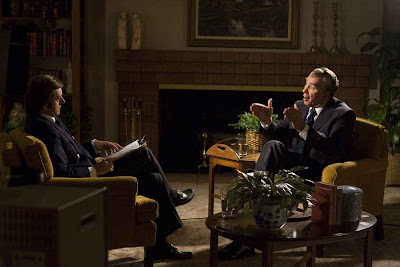 What follows is one of the most riveting meeting of the minds television has ever seen, with the lightweight newcomer Frost in one corner, and the seasoned politician Nixon in the other. Through Langella's extraordinary performance (which focuses more on capturing the essence of the man rather than mimicry), Richard Nixon comes to life with a balance of cunning and humanity that adds a disarming depth to the character. He takes a character that could have easily been portrayed as a villain, and makes him sympathetic. For all his wrongdoing and mistakes, Nixon was a man just like anyone else. In many ways, Frost/Nixon succeeds where Oliver Stone's W failed. While that film managed to paint Bush in a sympathetic light as well, Brolin's W was always more a caricature, albeit a very good one. Langella turns in a performance so compelling that it is impossible to take your eyes off him.

Not to be outdone, Michael Sheen more than holds his own as Nixon's intellectual sparring partner, David Frost. When these two finally sit down for their face to face, time almost seems to stand still. I wish Howard had not structured the film like some kind of retrospective documentary, which seems to take away from the startling immediacy of the interviews. The titanic showdown speaks for itself, without the editorial comments that the participants give along the way. 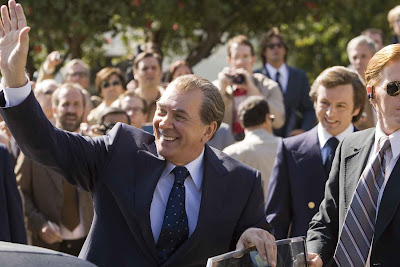 What struck me as most fascinating about the dynamic between Frost and Nixon is that despite the contentious interview process, the two never come across as enemies. Political adversaries perhaps, but never enemies. The two seem to have a grudging respect for one another, a recognition of each other's abilities that leads to a sort of strange friendship.

To his great credit, Howard explores this with the probing mind of not just a historian, but a consummate filmmaker. Much of the film outside the interviews is pure speculation and Hollywood conjecture, but it works. For all the fireworks of the interview, Howard astutely keeps the focus personal, and avoids the inherent staginess of the source material, although I do feel that the documentary framing device is superfluous.

Regardless, Frost/Nixon is a smart, crackling political drama marked by excellent performances and a finely tuned screenplay. Richard Nixon may not come away from this film exonerated, but if nothing else, it allows us to see the human inside a man whose legacy of Watergate has come to define him.

Anonymous said…
Outstanding review again, and I do agree that it's Howard's most solid review to date! i saw it yesterday as part of atriple-feature after VALKYRE and before SULLIVANS TRVELS and I was most impressed with both leads and the entertainment value of teh entire enterprise. Peter Morgan's play and script of course was the central ingredient here.
3:17 PM