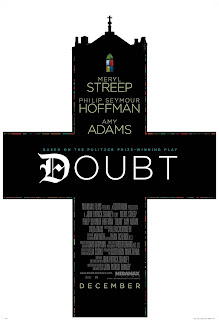 Every year, my theatre history professor assigns her Modern Theatre History class the latest Pulitzer Prize winning play as the final reading assignment of the semester. When I took the class the play was John Patrick Shanley's Doubt, and it was an experience I have never forgotten.

It is a gripping play, filled with deep, probing questions and moral ambiguities that provided quite a bit of stimulating discussion amongst the class. When I heard that there would be a film version, I hoped it would retain the same subtlety that made the play so compelling.

I was not disappointed.

Adapted for the screen and directed by the playwright himself, Doubt is a faithful translation of the play that never quite overcomes its roots on the stage, but succeeds on its own through Shanley's restrained direction and a truly staggering ensemble cast.

Meryl Streep (replacing the original Cherry Jones, who won a Tony for this role) stars as Sister Aloysius, a stern, old fashioned nun who is the principal of St. Nicholas school for boys. Sister Aloysius comes from a different time and a different way of thinking. The year is 1964, and while the rest of the world is moving ahead, Sister Aloysius spends her time decrying the decay of penmanship at the hands of ballpoint pens and the evils of Frosty the Snowman. To her, all students are up to know good and she has learned to expect the worst. 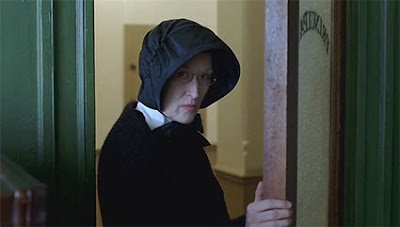 Everything is quiet and normal at St. Nicholas school, until the arrival of Walter Miller, a young boy who also happens to be the only African American in the entire school. Lonely and bullied by the other children, Walter finds himself under the caring wing of Father Flynn (Philip Seymour Hoffman), who goes out of his way to make sure that the boy is looked after. One day, after returning from a meeting with Father Flynn in tears, his teacher, Sister James (Amy Adams), goes to Sister Aloysius in concern, prompting the suspicious principal into an internal witch hunt, determined that Father Flynn has somehow had an inappropriate sexual relationship with the boy.

The film, like the play, keeps the accusations surrounding Father Flynn cloaked in ambiguity and doubt. The audience is never quite sure who the villain is. Is Sister Aloysius out on a mindless witch hunt because of her dislike of Flynn's more modern, secular embracing ways? Or is Father Flynn really the child molester she believes him to be? Shanley never answers those questions, nor should he. He leaves it in the hands of the audience, creating a thought provoking work that leaves lingering questions in the mind that last long beyond the film's chilling final frame. He manages to create sympathy for both characters, making each side seem plausible. The audience, in many ways, sees the film through the eyes of the innocent and naive Sister James, who is caught in the middle of the battle of wills, caught in the middle of a morally ambiguous situation where the correct answer is almost completely hidden. It is easy to see both points of view, but you know that at the end of the day only one of them can be right, and that changes everything. 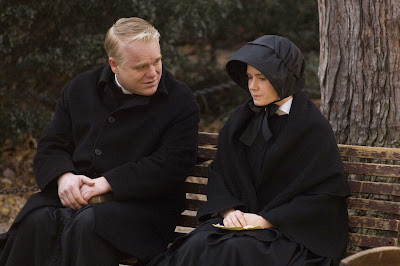 I was worried by the look of the trailers that the film would portray Sister Aloysius as a stereotypical hateful nun - a villainous figure. But thankfully that was not the case. Sister Aloysius is not a bad person, she truly has the best interests of the children at heart. Streep digs deep to find the character's humanity, the soul and compassion beneath the stern veneer; while Hoffman is her mirror image as the seemingly kind hearted Flynn, who wants to give the church a more friendly reputation. The real scene stealer though, is Viola Davis as Miller's mother. In one short scene, Davis leaves a greater impression than any other character. With powerful understatement, Davis portrays a woman determined for her son to have the best possible education no matter the cost, and makes surprising and heartbreaking decisions to achieve those goals. Her character serves to further complicate Sister Aloysius' crusade, and by the time Flynn finally confronts her, it is a titanic showdown between two master actors at the very top of their game.

As the film progresses, the situation becomes more dire and more complex, the camera angles become even more skewed as the tensions mount. Roger Deakins' appropriately icy cinematography highlights the caginess of the church hallways and the ever shrinking net of suspicion and doubt that the characters have created for themselves. Shanley deftly navigates these tricky waters without ever revealing too much or leading the audience in any particular direction. We are left to decide for ourselves. It is difficult to make a film whose emotions are based mainly on insinuations, but he succeeds admirably. Doubt is the very embodiment of its title, leaving us to grapple with issues of morality and decency in a way that films seldom do. It is an acting showcase with big questions and few answers, but for those willing to take the journey, it is an experience well worth having.

Anonymous said…
Ugh, can't wait to see this myself, love the cast, and I too read the play (recently tho, because I knew the movie was coming out) and it was amazing. So yeah, can't wait.
5:44 AM

Anonymous said…
Beautifully-written, and excellent lead-in with the classroom experience where you took Shanley's play on. Iknow the 3 1/2 star rating means it won't in all likelihood get into your Top Ten, but I bet it comes close. You gave this treatment a thorough and thoughful analysis that I am completely in agreement with.

Matthew Lucas said…
Nick, when does this open in SA?
2:41 AM

Anonymous said…
Well, I think February sometime, but I know the press screening is the day after I go back to school and since my parents want me to focus on school and school alone next year...yeah. Maybe earlier if the Oscar screeners leak, lol. I feel so dirty.
7:26 AM

Coleman's Corner in Cinema... said…
I'm just sitting down to write my own review, but I'll be sure to read yours once I'm finished, Matthew. Great lead-in with the personal story, though.
3:44 AM

Anonymous said…
I finally saw this, and I think it is fantastic. Streep and Davis are...wow, simply wow.
6:01 PM