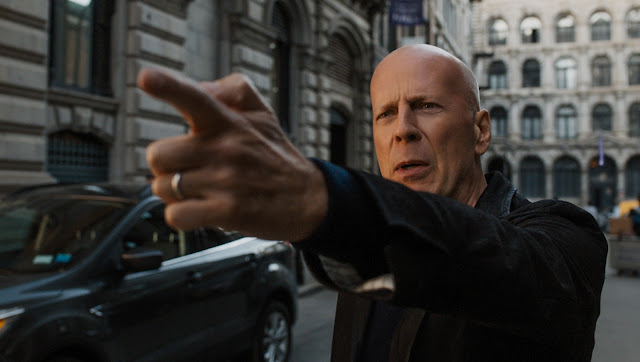 Death Wish is a film that feels almost defiantly out of step with the times. A remake of the 1974 Michael Winner film starring Charles Bronson, which itself was based on a novel by Brian Garfield, Death Wish feels like an NRA wet dream, where a good (white) guy with a gun exacts vigilante justice on the violent streets of Chicago. 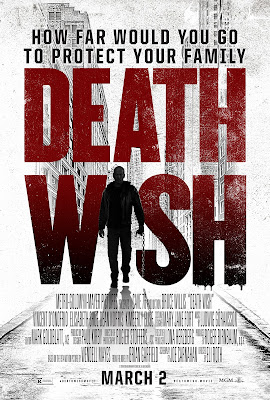 Director Eli Roth (Hostel) had the good sense to make the film's main villains white, but there's still something unsavory about the idea of a white savior with a gun brutally mowing down minorities in the streets. Sure, the film positions Bruce Willis' Paul Kersey as a kind of hero, a mild-mannered surgeon pushed to the edge by the death of his wife at the hands of a criminal gang. Faced with police inaction and a feeling of helplessness, he turns to murder as an avenging angel known only as the "Grim Reaper." Roth tries to throw in some lip service to moral ambiguity, as journalists and radio personalities debate whether or not what he is doing is right, but these people are almost portrayed as buffoons. Who would dare question the righteousness of Bruce Willis seeking justice for his family?

Therein lies the biggest problem with Death Wish - there is no real moral ambiguity here. The people he kills are all "bad guys," and Willis never has to come to terms with what he's doing. No remorse, no questioning, just cold-blooded murder. In this "good guy with a gun" fantasy, only the evil are hurt, and the righteous escape unscathed. There are saintly heroes and dastardly villains and nothing in between. When Willis, a surgeon who has never before handled a gun, starts shooting indiscriminately, he miraculously never hits any innocent bystanders, and always hits the evildoers standing close by.

This pipe dream isn't just ridiculous, it's dangerous. Is this the kind of 2nd amendment utopia envisioned by the NRA? Where random people walk around with guns and shoot the bad guys who "have it coming" with no due process? This isn't a utopia, it's a fascist hellscape, a masturbatory act of firearm fetishism that paints a grim picture of a world overrun with crime that can only be rescued by a white savior with a gun.

The original Death Wish at least attempted to posit its thesis in a frame of moral ambiguity, standing alongside Clint Eastwood's Dirty Harry and John Wayne's Brannigan as urban westerns in need of a lone gunslinger. But in Roth's anachronistic 2018 version, the only people who can protect us are armed vigilantes unencumbered by due process of law. It feels like the wrong movie in the wrong time, a wrote and needless remake where even its star seems bored, sleepwalking from one gleeful act of brutality to another.  It begs the question - why on earth did anyone think we needed this right now, a Trumpian 2nd amendment manifesto in a time when the tide is finally beginning to turn against the NRA and its cronies? Rarely has a film felt so wrongheaded, and so artistically inept.