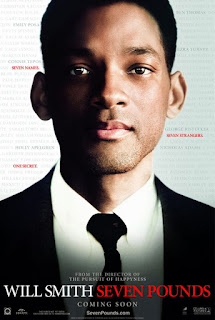 When I first saw the trailer for Gabriele Muccino's Seven Pounds, my initial reaction was "WTF was that?" Now that I've seen the actual film, my reaction isn't really all that different.

Muccino's last film, The Pursuit of Happyness, was hugely popular, but I found it to be mostly mediocre, sentimental pablum, with a fine performance by Smith at its core.

While Smith does a fine job in Seven Pounds once again, the film itself is a mess, a convoluted mishmash of morality tale and spiritual hooey about Ben Thomas (Smith), an IRS agent who sets out to profoundly help seven complete strangers as a way of atoning for the mistakes of his past.

Along the way he meets Emily Posa (Rosario Dawson), a woman suffering from congenital heart failure and waiting on a heart transplant from a donor of a rare blood type, and falls in love, making him question his motives and his goals.

The title is a take off on the pound of flesh demanded by Shylock as payment in Shakespeare's The Merchant of Venice, as Thomas seeks to make up for his past while making personal sacrifices to improve the lives of those in need. And as the story slowly (oh so slowly) unfolds, we come to realize the source of his grief and the motivation for his atonement.

The problem is that for most of the movie we aren't even told what he is doing, much less why. So the audience is left to wander in the dark for most of the film while the story meanders through a sea of saccharine muck toward a predictable conclusion that can be seen coming from a mile away.

Smith's character is played off like a flat saint, his motivation weak at best. It's as if Muccino is determined to pass him off as some second-rate Christ figure, but he is so perfect and flawless that it stretches the bounds of believability past the breaking point and gives us nothing to identify with. Whether he's saving old ladies from monstrous nursing home facilitators or saving a battered family from an abusive boyfriend, Thomas is the embodiment of divine sacrifice, angelic and flawless. And completely bland. 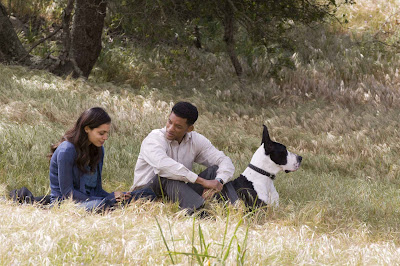 I would have been better if Muccino's direction weren't so ham-fisted, hammering away at all his big ideas on personal morality with the blunt edge of a jackhammer. The film is filled to the brim with overwrought plot twists and inappropriate, mood-breaking songs (including one that was featured prominently in Garden State, and yanked me right out of the movie) to the point where I just wanted to scream "enough!" There's enough sugar here to put anyone into a diabetic coma.

Smith and Dawson are fine, but they are bogged down by an onslaught of self-righteous pontificating from a silver screen soap box. No amount of beautiful imagery or halo-lit self-seriousness can make up for poor storytelling, no matter how important it thinks its message is. Helping others may be a worthy cause, but as a film, Seven Pounds chokes on its own muddled spiritual regurgitation.

Anonymous said…
Ugh, and to think a little piece of me wanted this to be good. Stupid me.
4:52 PM

Matthew Lucas said…
I guess there was some potential here, but I'm just not a fan of Muccino's schmaltzy sensibilities.
9:07 PM

Anonymous said…
The movie was good honestly, this movie kept me going on like Why? and i don't mind surprise endings that answers alot of my questions about this movie. Will Smith performance was up to parr like always. One thing i disagreed is him sleeping with the dying chick. it made no sense, theres alot of passion and heavy breathing im surprised she didn't die on him there. but it's hollywood. this movie is not an oscar movie. but it's a good collectible
7:27 PM