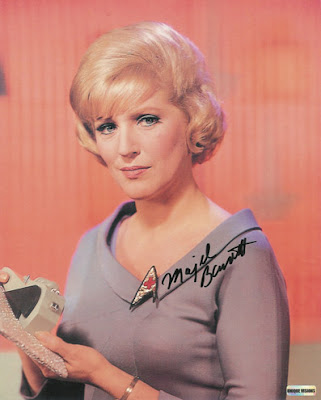 Majel Barrett, who played Nurse Chapell on the original Star Trek, and was also featured as the voice of the computer and Lwaxana Troi on Star Trek: The Next Generation, passed away yesterday from complications with leukemia.

Barrett was the wife of Star Trek creator Gene Roddenberry, and was the only person to appear in all five Star Trek shows.

She will also be heard as the voice of the computer in J.J. Abrams upcoming Star Trek film.

Rest in peace, Majel. You will be missed.
Email Post

Anonymous said…
She will be missed indeed. I grew up with the original series and eventually became on obsessive trekkie like you Matt. Nice of you to highlight her unjtimely passing.

Her deep-repressed love for Spock was her character's most renowned and fascinating side.
1:58 PM

Matthew Lucas said…
Indeed, Chapell never really got the screen time she deserved. But I must admit my favorite of Barrett's characters was Lwaxana Troi.
2:10 PM

Maurie said…
I think Lwaxana Troi is hilarious, and sometimes very touching, like when she admits that she's lonely.

It also would have been interesting to see what they could have done with Number One--that could have been a really powerful female character, though I don't think she would have worked as Kirk's second in command... and I'm glad they decided to keep Spock instead. :)

I agree that Nurse Chapel never got the screen time she deserved--they did some with her in the first season ("What Are Little Girls Made Of?") but after deciding that she was madly in love with Spock, they never did much more with her. I love Nurse Chapel, part of it being that I can relate to her... relationship issues, lol.

Anyway, Majel was a beautiful lady and she will be sadly missed.
11:37 PM