For some reason, I was the only member of the press who showed up to last Monday's "press screening" of Slumdog Millionaire in Charlotte. The rest of the audience was filled out with regular folks who had scored promo tickets through giveaways and specialty websites. 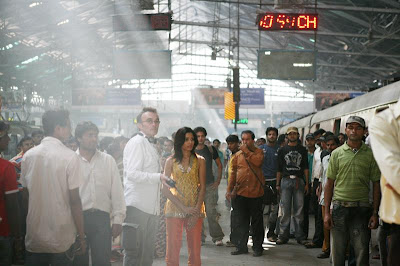 L-R: Director Danny Boyle and Freida Pinto filming a scene in a Mumbai train station for Fox Searchlight's Slumdog Millionaire.
Many in the audience were of Indian descent, and you could feel the excitement in the room before the lights went down. But when the word "Mumbai" flashed up on the screen to set the stage for the film to come, there was an audible ripple through the audience. A hushed sense of shared recognition that something terrible had just happened there.

In the latest issue of Entertainment Weekly, the magazine talks to director Danny Boyle about the effect the tragedy has had on his film, and how even the director himself views the film in a new light. It's especially chilling to hear that several of the film's key locations, including the pivotal train station that houses the film's glorious finale, became the objects of terrorist attacks last week. The film takes on a whole new level of bittersweetness when viewed though that lense.

The article has not yet been posted online, but is well worth the read if you can find a copy. I'll post a link when it becomes available.
Email Post

Daniel said…
Wow, THAT train scene is where the attack happened? Jeez.
5:09 PM