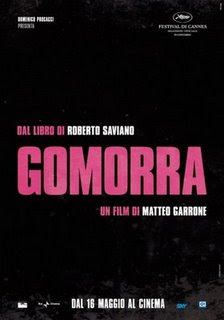 Expectations can be a killer. I guess that's what I get for following the internet buzz as closely as I do, because Matteo Garrone's Italian mob drama, Gomorrah, has been the pre-ordained front runner for the Best Foreign Language Film Oscar for months now.

So I went in expecting something earth shattering, but instead discovered a sharp, well made modern day mob film that is nowhere near the masterpiece it is made out to be.

I'm not saying it's bad, and it is partially my fault for expecting so much, but I just don't get the hype surrounding this film.

The source of much of the praise most likely stems from the fact that it is based on a true story, adapted from Roberto Saviano's incendiary expose of the Comorra crime syndicate in Italy; a book that was so accurate and so controversial that the author had to be put under 24 hour protection to protect him from mob reprisals. In other words, Gomorrah is not an easy sit.

Nor is it meant to be. The title is obviously a play on the name Comorra, and the ancient Biblical city of Gomorrah, which, according to myth, was destroyed by God for being completely infested with wickedness. 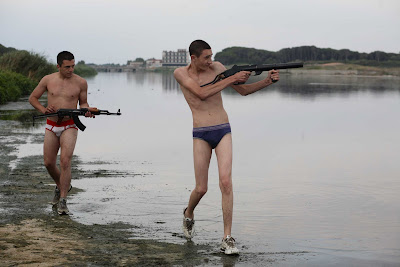 Of course, there can be few organizations more riddled with wickedness than Comorra, and the film gives us an inside look at even the most mundane inner workings of one of Italy's most powerful crime families. Garrone takes us through the organization from a myriad of perspectives, from the lowliest runners, to the children who make up the next generation, to the local hierarchies, to the highest levels of the leadership, to the wannabes looking in.

In the center of it all we have Pasquale (Salvatore Cantalupo), a tailor who makes the mistake of dealing with the Chinese on the side, and Marco (Marco Macor) and Ciro (Ciro Petrone), two teenage hoodlums who, disdainful of taking orders, decide to create their own independent mob by stealing resources from the Comorras.

And perhaps most disturbingly, there's Toto (Salvatore Abruzzese), a young boy working his way to being initiated into the mob. In one of the film's most chilling scenes, big burly thugs take the prospective young mobsters into a cave, strap them into a bulletproof vest, and with blood curdling nonchalance, shoot them point blank to test their courage. 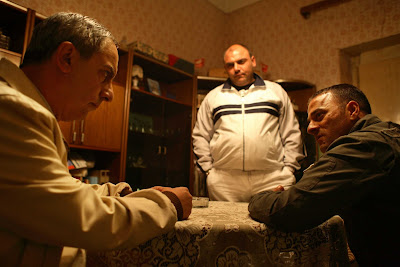 Moments like that make Gomorrah a frightening, no holds barred behind the scenes tour of mob operations, but try as I might I could never get past the feeling of "what's the big deal?" We've seen mob movies before, and while this one is notable for its examination of a real life mob, I just didn't find it that special. It's a fine technical achievement, competently directed by Garrone from a cast of non-professionals. But for all its directorial precision, Gomorrah lacks emotional depth and insight. Craft-wise it's solid, but beyond in-house intrigue there's not an awful lot going on beneath the surface, especially with its characters, with whom I think much more inner conflict could have been explored.

I know I've made it sound like I don't like the film, which is not the case. I was just...underwhelmed by it in the face of massive expectations. My problem is that if this film is going to be racking up foreign language awards when there are far more intellectually and emotionally satisfying works like Waltz With Bashir, Let the Right One In, and I've Loved You So Long (although the latter two aren't eligible for Oscar consideration).

Gomorrah will likely be a contender for Best Foreign Language Film at this year's Oscars. And I won't say it doesn't deserve the nomination. But my fingers are crossed for Waltz with Bashir. It's a perfectly solid effort, but I just can't help but feel that something, somewhere, is missing.

Anonymous said…
Well, in view of what you say here, I won't go out of my way to see this until some essential stuff is viewed. I'm not surprised however at what you say here in your excellently-written piece.
11:54 AM

Matthew Lucas said…
Yeah I would not put it at the very top of the list, but it's worth seeing to stay up to date, especially if it gets an Oscar nod. Although if they didn't nominate "4 Months," this may be too edgy for the foreign language committee.
3:19 PM

Anonymous said…
I am an American living very near the town were the author lived. This place is not only a crime riddled war zone but an environmental tragedy to Italy and Europe. This movie helps spread the word to world what is going on here in Naples. This movie has been long awaited by Americans having to live here for service to their country so maybe our Congressional Representative might see what our military families are living in.
5:58 PM

Anonymous said…
Yeah Sam, if I were you I wouldn’t purposely not see this in favour of the other stuff, especially since your beloved critics will be eating it up with a spoon (or so I assume, what do I know). I respect Matt for not loving it – expectations are such a bitch – but I for one, loved it a hell of a lot.
12:04 AM