Variety is reporting that Catherine Hardwicke, who just delivered the highest grossing opening weekend ever for a female director with Twilight, has passed on directing the sequel, New Moon, slated for release late next year or early 2010. 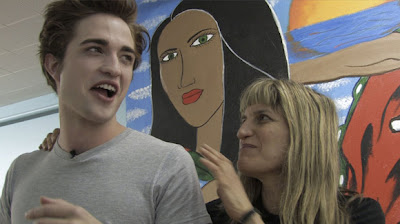 Hardwicke (right) with Robert Pattinson on the set of Twilight.

Sources cite the rushed production schedule as well as previous engagements as reasons for Hardwicke's departure.

The hurried production schedule doesn't bode well for the film adaptation of the terrible book, but it will be interesting to see what a fresh perspective will do with the franchise.

J.D. said…
Do you really want Cuarón's name on this crap? Sure, he'll manage to make it not only good but probably extremely good, but COME ON. Plus, he's already got like three movies in-production.
11:11 AM