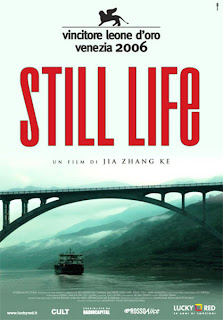 China's Three Gorges Dam, the largest engineering project ever conceived, has received a lot of attention in 2008. First was the excellent documentary, Up the Yangtze, a poignant examination of displaced citizens forced to relocate by flooding caused by the dam.

Although it was filmed in 2006 (where it won the Golden Lion at the Venice Film Festival), Jia Zhang Ki's Still Life wasn't released in the United States until this year, after Up the Yangtze, which gives it a powerful immediacy it might not otherwise have had. Coming into the film with a knowledge of the history and purpose of the Three Gorges Dam, as most in China most certainly do, makes the film that much more moving, even though it's perfectly capable of standing on its own.

Zhang doesn't focus his tale so much on the people who have been displaced by the rising waters of the Yangtze, but on two people searching for their estranged spouses in the flood zones. Visiting from other provinces, Shen Hong (the phenomenal Tao Zhao) and Huang Mao (Zhao Lan) are visting areas of the country marked for demolition, that will soon be swallowed by the rising river. Neither has seen their spouse for years, and are looking to reunite (and in Huang's case, see his now grown daughter) before finding them becomes impossible. 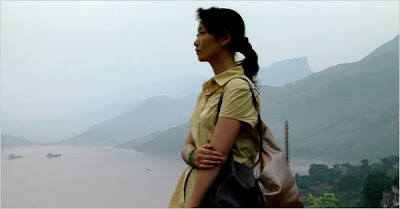 While on their respective journeys, Shen and Huang explore the flood zones and get to know its citizens, living among them in the waning days before whole towns disappear in the name of progress. Their stories are not connected but are inexorably linked. Zhang draws subtle connections between the two stories, be they in the simple items they acquire along the way, or similarly framed shots, or an angelic little boy singing songs while others work...the universality of their struggle is never in question.

Like Up the Yangtze, Still Life is very much an elegy for a dying China, one whose history is being erased for mindless progress. There is an air of melancholy that lays over the film like a blanket. Huang finds a job while searching for his ex-wife with a demolition company, tearing down buildings in preparation for the flooding. Everywhere they turn, buildings are painted with flood lines to indicate where the water level will be at the next phase of the construction. Everywhere around them, the culture and history that makes China what it is, is being literally swallowed up by the future - progress for progress' sake at the expense of a national identity. 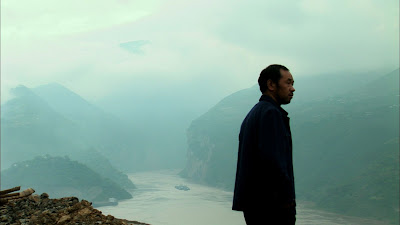 Zhang frames each shot with an incredible deep focus, reinforcing the beauty of the Yangtze as well as the national history that it represents. The gorges that it winds through will soon be little more than lakes, the towns and homes along its banks just a memory. He has a remarkable eye for breathtaking imagery, which only serves to make the imminent destruction more heartrending. Much of the towns they once new are already gone. When Huang takes a taxi to his wife's former home, he finds it completely underwater, lost forever - family histories, memories, and homes have all been swept away.

Through the graceful subtlety of Zhang's direction, Still Life captures a moment in time that can never be regained. It is peppered with metaphors of the new overtaking the old, and Zhang does not want us to forget. We are only who we are because of where we have been, and such utter disregard for that can only be harmful. Progress is a good thing, but not at the expense of history. The human cost is far too great. As we watch the great river boats making their "farewell tour" of the Yangtze, we are painfully reminded of how this modern marvel is affecting every day people. As the people sift through the rubble and attempt to rebuild their lives elsewhere, the waters just keep rising, a testament to a dream of Chairman Mao at the expense of the common people once so championed by the tenants of Communism. It is with that mournful construct that Zhang forms his simple, finely tuned narrative of people attempting to rebuild their pasts, and turns it into something deeply moving and instantly accessible, even to foreign eyes. Still Life is more than just a window into a disappearing world, it is a requiem for the soul of a nation.

Anonymous said…
I must see this someday, it really sounds great, and I have only read Dargis' review of this and your own fine review, but I am most interested.
3:31 PM

Anonymous said…
Nick, this has been available (apparently) for quite some time on Region 2 DVD. i plan to order it this week, but I'llk admit that the way Matt saw it of course is teh best way. Outstanding review--the latest in a long line of outstanding reviews here.
10:18 PM

Daniel said…
Yaarrrgh, I'm with Nick. I missed it last year during a brief theater run. I'll catch up with it soon, and am seeing it now on many Ten Best lists.
2:28 PM